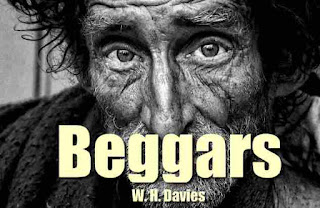 There is no question but that the American beggar is the finest in his country; but in that land of many national- ties he has a number of old-country beggars to contend with. Perhaps it would interest — it certainly should — a number of people to know how well or ill their own nation is represented by beggars in that most im- portant country; whether England, Ireland, Scotland, Germany, and other countries have cause to be proud or ashamed of their representatives.
Both France and Italy have much cause to complain, for you may often travel many miles and not be approached by a French or Italian beggar. If you meet an Italian, you can safely despise him as a working man with hard-earned money in his pocket, though he may be stealing rides like a beggar, and making coffee with real beggars at their camps.
With regard to Germany, she can place in the field a very large army of second-rate beggars; but it is seldom that you meet a German beggar whose ambition raises him above that. Other nationalities, who go to private houses and beg ready-cooked meals, despise the German beggar for his low taste in being satisfied with no more than common dry food. All beggars make coffee at campfires, but it is only the German that takes the trouble to carry on his travels his own tin can; for every town has near it a beggars' camp, and cans are always to be found. The German's method is to beg the baker for bread, the butcher for sausage, and the grocer for coffee.
When he is successful, he repairs to the camp and makes what he calls "an excellent meal" on these dry materials; whereas other beggars have either had a good hot meal at a private house, or have begged a number of paper parcels, in which is buttered bread, and there is cake, and one parcel may have fish as a change from the meat in another, and there is often an apple, orange, or banana for dessert. The German does not aspire to these luxuries and is well satisfied to get the plain diet of his native land — without taking advantage of the offers of a richer country — and to do no work for it. He is not a true beggar either, for he is always ready to do odd jobs, such as fruit or hop picking and potato digging, but is not eager for steady work.
Few people would think the Scotsman makes an excellent beggar, seeing that his manner is so undemonstrative. Although he is seldom heard to raise his voice above one distinct pitch, or to indulge in loud laughter, or to show the emotion of any kind, yet, for all this, he is an excellent beggar. There is quite a large clan of Scotties among American beggars. He is a good beggar for the simple reason that he is a good talker.
Almost every Scotch beggar I met in the States of America was inclined to be talkative, and yet they all managed to conceal their private affairs. Although a Scotsman would be one of the last men to go hungry in a civilized land, yet he must be objected to as a true beggar in that he is avaricious for money, and would immediately take ad- vantage of remunerative employment. Alas for the poor Irishman! for he is the timidest beggar of all.
Though he is so independent in throwing up a job, he is always glad, when his money is gone, to seek another. How the poor fellow does suffer hunger when seeking work, not having the courage to beg; and how independent and forgetful he is when his appetite is satisfied. Even the German, who as a beggar is despised by American, English, and Scotch beggars, stands head and shoulders above poor Pat. I am sorry to say so, but the truth of the matter is that Pat receives charity from other beggars — English, Scotch, and such American beggars as are proud of their Irish extraction. If these men do not feed him, they often show him a good house where he only has to show his face and be fed. I remember a very mean trick being served on two Irishmen,
Pat and Tim. The guilty one was a Cockney, and he was lucky to escape with his life. Seeing at the camp two hungry and helpless Irishmen, he promised to show them a good house, at which no beggars, however often they came, were refused food. The elated pair accompanied " Cockney " for this interesting purpose, and were soon shown a very large house, at which, the Cockney said, *'he had been treated with as much consideration as though he were the Pope of Rome." He then left them to make their own arrangements, and, after much indecision, it was arranged that Pat should go first, and, on his return, his companion Tim should try his luck. Pat, with every confidence, approached the big house and rang the bell; but the door was almost immediately opened, as though the inmate had been lying in wait. The Irish- man had scarcely opened his mouth when the man that answered the door shouted, "What, you big, able-bodied rascal? I'll give you something to eat," and rushed at the poor Irishman with a thick walking stick. This was very serious, for Pat also saw the grinning face of a stalwart nigger behind his master, and the Irishman thought the best thing he could do was to leave in a hurry without more words, which he did.
the book details : Download 8 MB