Life and death of Mr Badman 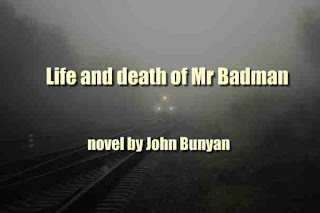 Plot Summary:
Historical novel:
Both these religious allegories have for their raw material the rude country life of Charles the Second's time. This, and the characters typical of country, town and village, are most faithfully and vividly represented.
from introduction:
I was considering with my self, what I had written concerning the Progress of the Pilgrim from this World to Glory; and how it had been acceptable to many in this Nation: It came again into my mind to write, as then, of him, that was going to Heaven, so now, of the Life and Death of the Ungodly, and of their travel from this world to Hell. The high in this I have done, and have put it, as thou seest, under the Name and Title of Mr Badman, a Name very proper for such a subject:
I have also put it into the form of a Dialogue, that I might with more ease to my self, and pleasure to the Reader, perform the work. And although, as I said, I have put it forth in this method, yet have I as little as may be, gone out of the road of mine own observation of things. Tea, I think I may truly say, that to the best of my remembrance, all the things that here I discourse of, I mean as to the matter of fa Si, have been asked upon the stage of this World, even many times before mine eyes.
And let me entreat thee to forbear Quirking and Mocking, for that I say Mr. Badman is dead; but rather gravely enquire concerning thy self by the Word, whether thou art one of his Linage or no: For Mr. Badman has left many of his Relations behind him; yea, the very World is overspread with his Kindred. True, some of his Relations, as he, are gone to their place, and long home, but thousands of thousands are left behind; as Brothers, Sisters, Cousens, Nephews, besides innumerable of his Friends and Associates.
the book details : Download 21.2 MB