Natural law- An essay in ethics 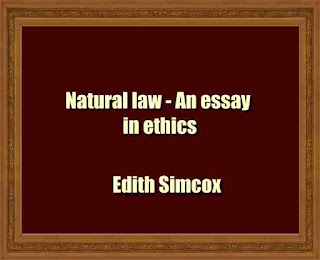 Excerpt:
If truth is at all within the reach of human capacity, 'tis certain it must lie very deep and abstruse; and to hope we shall arrive at it without pains, while the greatest geniuses have failed with the utmost pains, must certainly be esteemed sufficiently vain and presumptuous. I pretend to no such advantage in the philosophy I am going to unfold, and would esteem it a strong presumption against it was it so very easy and obvious.
Hume's Treatise of Human Nature.
Whether human acts and feelings are subject to the law in the same sense as the modifications of unconscious natural objects?
Human feeling presumably so subject as itself a product of physical laws Human will be subject unless human nature is essentially unknowable The nature of a thing equals the laws of its manifestations Definition of law Accidental uniformities not to be called a law True laws state the relations between things which are made constant by otherwise fixed properties in the things related.
Two things acting on each other modify each other in a given fixed way, but one does not impose the necessary modification on the other, it follows necessarily from the nature of both The laws imposed on the human will equal the dictates of the sum of efficient motives The laws of nature obeyed involuntarily and unconsciously; positive law by deliberate acts of will Query, whether law presupposes a lawgiver? The essentials of law are generality/
The general rules which men find it natural and necessary to obey, regulate their actions and feelings towards each other, and their feelings towards the fixed immaterial conditions of their moral and intellectual life. inquiry into the conditions of human existence takes for granted that something exists.
By the existence of a thing, we understand only the real power of producing and undergoing modification; and as, by human consciousness of existence, we understand only the power of perceiving modifications produced or suffered by the conscious subject and other real things, it is evident that speculation concerning human existence can only be concerned with the perceivable modifications suffered or produced by human beings.
The shortest way of stating a case is always the most abstract. No simple word, to which we attach clear and ready images, will serve to describe both sides of the phenomena of life. "We may speak of modifications, or change and the consciousness of change; but, saving a few metaphysicians, everyone will object that change presupposes the existence of things that change; and there is no easily intelligible formula for the fact that it is only by changes in ourselves that we discern the existence of change, or changing things, beyond ourselves. The provinces of natural science and moral philosophy touch on the problem:
Whether the modifications of which human beings are conscious in themselves are subject to the law in the same sense in which the modifications of unconscious natural objects are so subject, and whether they may become in the same way matter for positive, exact knowledge? If consciousness is to be trusted or in other words,
if the changes of which we are conscious in ourselves are in any way a faithful reflection or counterpart of the changing relations among other objective existences one- half of our life, that of passive perception, will be as completely and knowably subject to the law as the orderly natural phenomena that we perceive. If further, the human mind is made, as the human body is made, of that which it feeds on and assimilates, its long course of orderly perception will grow must have grown long since into an organic habit of knowledge, a set of mental predispositions, answering to the most general set of outward impressions.
As the animal eye is made by the action of the light which it perceives upon the specially organised matter, so the animal mind is made by the perceptions it registers through a still higher development of the vital mechanism. This natural continuity, or congruity between thought and things, fixes the objective place of man, the knowing and feeling, in the order of nature, the knowable and sensible. But man is not merely a passive register of natural phenomena.
No natural force is more active and prolific than the human will, and we cannot venture, as yet, to take for granted that the actions and mental passions of men stand in as constant relations to their nature and circumstances as their physical feelings and mental perceptions.

Personal motives are not always forthcoming to urge everyone to the end generally most desirable . . . 315
Inexpedient to interfere with the accidental consequences of un-
equal natural ability r . . , . . . 317
Desirable to substitute a rational estimate of value for the fluctuating
competitive price ...... 318
Partition of the " unearned increment " of social wealth. .318
Natural value not diminished by increased production, nor real purchasing power ....... 323
Honorary services the natural price of unearned wealth . . 325
The ideal state on all points is practically unattainable; query, Whether
the best possible be an approach to the unattainable ? . . 326
Demand that ethical theories shall carry with them their application
to the practical emergencies which concern us . . . 327
The duty of individuals traced out by the social and the personal
ideal conjointly ....... 328
Temporary, the reluctant and conditional exaltation of the philanthropic reformer . . . . . . 331
^Esthetic emotion ....... 335
Positive truth ....... 337
Moral diffidence of a critical introspective age . . . 339
The asceticism of secular fastidiousness .... 341
No real antagonism is possible between the claims of social duty and
individual perfection ...... 344
The specialisation of function among individuals is usually a gain, but
increasing differentiation of classes is a loss, if it extends beyond
an external division of labour to a radical contrast of nature. 346
Personal completeness a condition of the best action, however highly
specialised ....... 347
Download 18 MB