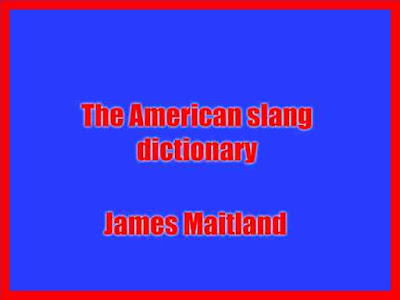 From introduction:
In the preparation of this " Dictionary of American Slang," it has been the aim of the compiler to include as many as practicable of those words and phrases which, though they find no place in standard dictionaries, enter so largely into the everyday speech of the people.
The United States, when it borrowed the language of the Mother Country, adopted also many of its colloquialisms and many more of its provincialisms. Ours is the tongue that Shakespeare spoke, and our inheritance includes much of the heterodox philology of our British cousins. Especially for sporting and theatrical slang, and to the language common to the thief and the thief-catcher and known as "Thieves' patter," the majority of words, and phrases are as often used in one country as in the other.
slang words and phrases of English origin and use.No such collection has heretofore been made. The earlier English works — such as those of Grose, Pearce Egan and their followers, copyists and plagiarists cover but a narrow field. They deal largely with obsolete Cant, with the no less obsolete terms of the prize ring, with purely Cockney and provincial idioms in which not even an antiquarian interest can be felt.
and glossaries of back slang, rhyming slang and the alleged centre slang. Some 300 pages are apportioned to definitions of slang words and phrases, and the average number of these to a page may be estimated as a dozen. In all less than 4000 definitions are given, while the present work furnishes over 6000.
The present compiler holds, without the slightest disrespect to earlier searchers in this field, (too many of whom he is under great obligations) that no work heretofore published upon this subject meets the needs of the educated people of the United States in the present day. No dictionary of^ American slang exists, although collections of Americanisms have been published, one of which (that of John Russell Bartlett) is valuable but does not cover the field of American slang.
The rhyming slang which speaks of rain as "Mary Jane" or "alecampane" indifferently is of no possible interest. As to the socalled "Medical Greek," of which Albert Smith gave us some examples in his amusing novels, its distinguishing characteristic is that a "stint of pout" means a pint of stout, and that you "poke a smipe" instead of smoking a pipe. The alleged wit of the American newspaper humorist who evolves the "saccharine subsequently" as a variation on the "sweet by-and-by" is of the same high order and we want none of it. For the omission of the indecent phrases which disfigure so many books upon slang no apology is needed.
the book details : Download 8.9 MB