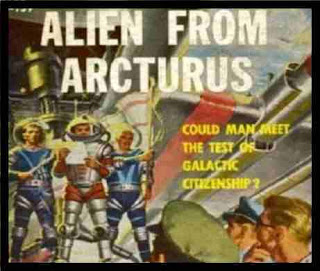 Excerpt:
The first unusual thing to happen that day—and maybe it was an accident, and maybe not—was that someone had switched belts with Malcolm Fletcher, where they hung on hooks along the wall of the Company’s downtown penthouse lunchroom. Mal put on the strange belt without noticing it and when he stepped off the edge of the rooftop to fly to Warehouse and Supply—some thirty miles away at White Bear—the power pack in the belt gave him one kick into Space and quit dead, leaving him falling through thin air toward the rose-coloured pavement nineteen stories below.
Luckily, the safety force shield around the building at the lower levels caught him, slowed him down and stopped him before he hit, but it gave Mal the cold shivers to think what might have happened it he hadn’t discovered his mistake before stepping off some unshielded building—say, like Laboratory Annex itself—where he had been working these past few months. Five feet eleven inches of sandy-haired young physicist would have been spread out over the considerable area. As it was, he_- suffered nothing worse than embarrassment.
An Archaist, riding by on a white horse and in a full suit of chain mail, stopped and guffawed at the sight of a man in sedate kilt and tunic of scientist green tumbling head over heels on the resilient pavement. And even a few Neo-Taylorites, holding an impromptu prayer discussion on the corner of the street, tittered appreciatively as Mal, scowling, got up and brushed himself off.
They would have done better to keep quiet, for their giggles drew the attention of the Archaist, and he wheeled his horse toward them with ominous ponderousness, causing them to scurry for sanctuary in the Company building, their ornate yellow robes flapping like the gowns of frightened dowagers. Seeing he had missed them, the Archaist reined up and turned to Mal. “Down with the Aliens!” he said formally. “Go drown yourself!” growled Mal, brushing himself off. He was in a bad humor at the thought of what the result might have been had the power-belt switch remained uncovered, or the building behind him had its shield turned off. The Archaist’s face darkened and he reached for a mace hanging at his saddlebow. Mal put a hand on his own holstered sidearm and the Archaist changed his mind. “Not my weapon,” he said, reining his horse around. “Some other time, bud.” “Go pick on a Neo,” snapped Mal—but the Archaist, riding off down the street, his plume aflaunt from his helmet, professed not to hear him.
the book details : Download