A forgotten John Russell- being letters to a man of business 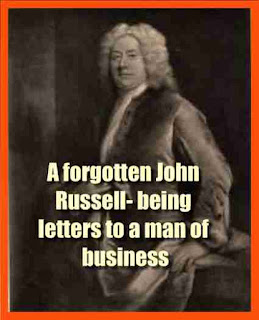 Among the many shortcomings and things forgotten in this book, the need of a preface had also been overlooked, and, is required at the last minute, is written almost under protest, and with the consciousness of there being very little more to say. John Russell knew well enough in his lifetime what the ' struggle for existence ' meant.
Whether he would think it a compliment to be thus dragged out in print to take part in the ' struggle for existence ' of the modem book world, is an open question. Perhaps he might, for his thoughts towards his fellow-creatures were of the most friendly and optimistic description, and it may be some expiation of the neglect his descendants have shown him — his career for- gotten, the portrait called by his name left frameless and forlorn in the attics — that one of them should have at last taken a little interest in his concerns. Russell and most of his friends represent the lesser folk who worked for England, as well as for their own bread and butter.
It might have been expected that the letters of these * sea captains,' written to a man of their own standing, would prove coarse and unpleasing, but for the most part they are not so, and the softer side shown in them may surely be as truly a part of their real character as the rougher one with which they are more generally credited.
At all events, their downright words leave one with a wholesomer feeling towards that generation than do those of many contemporary courtiers, the Herveys and Chesterfields who often disgust one in spite of their studied language and superior importance. These smaller people stood in the far background of history it is true, but they touched hands with and were not forgotten by the noble spirits who followed them.
Our greatest sailor studied their ways, and doubtless himself profited by their mistakes and successes. It happens that the trifling mementoes of Russell's small affairs have found a home in company with other relics kept in memory of the hero of a hundred years ago. Among them, a well-worn 'Naval Chronology,' which has been of great help in piecing together the histories of these still more distant men, bears the honoured signature of ' Nelson and Bronte.'
Some contents:
CHAPTER I
1724-1729
Russell's character and the situation at Gibraltar— Comes to England— Appointed Consul at Tetuan — Leaves England for Morocco— Embassy to the court at Mequinez — Braithwaite's account
of their adventures— Redemption of Christian captives . . 1
CHAPTER II
1730-1734
Russell returns to England — His family affairs — Appointed Clerk of the Cheque at "Woolwich— Duke and Duchess of Richmond — Letters from Tetuan and Gibraltar — ^The 'Three Choirs' — Elections of 1734 30
CHAPTER III
1734
Russell's sailor friends — ' A general delivery office ' — Cheating the Custom-house — Stepney Feast — Admiral Walton — News from Tetuan — More captives from Barbary 52
CHAPTER IV
1735-1738
Our fleet in the Tagus — Captain Philip Vanbrugh — Captain Swale — Protection from debts — 'No search' — ^The Goldsworthya — Letters from the Diamond 75