A century of vaccination and what it teaches 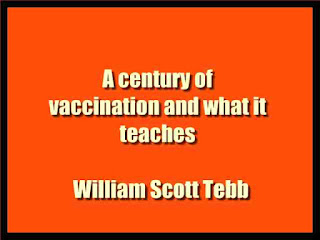 So long as the practice of vaccination remains established and enforced by law, it will be the duty of every citizen, who is also the father of a family, to form a judgment upon it; unless, indeed, it is to be held that the infallibility of the legislature and of the medical profession, which in this instance directed legislation, is so well assured that enquiry is superfluous, if not culpable.
But it is a sounder doctrine that the existence of the law does not relieve parents of responsibility towards their children, and more especially parents (nowadays the majority) who have heard that the efficacy of this operation has been called in question by competent men, while its risks, so long denied, are now on all hands admitted.
I am, therefore, not without hopes that among my readers will be included a fair number of the " general public " interested in the subject by the pressure of compulsion, and anxiety before they submit a child to vaccination to feel assured that they are doing the right thing, being also resolved to withhold the child from the operation if they cannot be satisfied with this. But I here address myself more particularly to two classes — to my medical brethren, and to those whose . business it is to legislate for the country on this subject.
On the former I desire, with all respect, to urge the following considerations: — Can it be said that the Jennerian doctrine of vaccination has ever been placed on a truly scientific basis? I specify the "Jennerian doctrine," for there are other aspects of the vaccination or inoculation theory, which I expressly rule out of my enquiry.
It is a generally received opinion that in the case of certain diseases one attack affords some degree of immunity against a second. It is certain that there are exceptions to the rule, and it is further certain that the rule has never been scientifically established as such. Nevertheless, it is a generally accepted belief, with evidence in its favour, and in the pages that follow I do not reject or even attack that belief. Further, it is a postulate of the modern inoculation doctrine that a mild or modified attack suffices to secure this immunity.
Whether this be so or not, I cannot tell. It is a matter into which I have not been led to enquire, and I am willing to grant it for the sake of argument since it does not really concern the position which I am calling in question. What I do deny, as the result of my enquiries, is that an attack of cowpox secures immunity against smallpox. To use technical terms in order to make the distinction clear: while I may allow within limits the truth of homeoprophylaxis or homeoprophylaxis, I am satisfied that there has never been shown any sort of scientific basis for heteroprophylaxy. If the reply be made that, granting it is wrong to teach that vaccination is homo- prophylactic, it is fair to claim for it that it is homoeo- prophylactic,
I should deny that such a claim can be sustained; and, though I am, of course, aware that variolous matter can be so modified by being taken at an early stage and passed once or twice through the calf as to produce, when inoculated, not an attack of small-pox, local effects similar in appearance to those of vaccination, yet that is not what is done every day by medical men who vaccinate.

CHAPTER I.
A Brief Account of the Early History of Vaccination, showing how it was accepted by the Profession on inadequate evidence - 9
CHAPTER II.
The Decline in Small-pox since the Introduction of Vaccination - - - - - - 31
CHAPTER III.
The Causes of the Decline in the Small-pox
Mortality - - - - - - 57
CHAPTER IV.
The Incidence of Small-pox on Vaccinated and Unvaccinated Communities
CHAPTER V.
Does Vaccination Prevent Small-pox? - - 105
CHAPTER VI,
The Mitigation Theory - - - - - 179
CHAPTER VI L page
Re-vaccination - - - - - - -214
CHAPTER VIII
Influence of Sanitary Measures on the Incidence
and Mortality of Small-pox - - - 241
CHAPTER IX.
The Injurious Results of Vaccination - - - 267
CHAPTER X.
Summary and Conclusions - - - - - 385
Diagram and Appendix ----- 405
Index - - - - - - - - 413
Notice:
Smallpox is a contagious, disfiguring and often deadly disease that has affected humans for thousands of years. Naturally occurring smallpox was wiped out worldwide by 1980 — the result of an unprecedented global immunization campaign. Samples of the smallpox virus have been kept for research purposes. Type of infectious agent: Virus
the book details : Download