Zoological mythology; or, The legends of animal 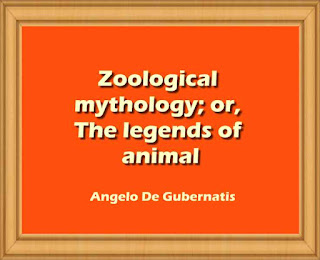 It is not without some little anxiety and trepidation that I, for the first time in my career as a student, venture to address myself to a foreign public, and clothe my ideas in a foreign tongue; nor is it without considerable diffidence in my own powers that I have chosen to do so on a subject which, however interesting it is on account of its novelty and its historical significance, has brought me face to face with difficulties, and a range of scholarship and speculation, which, as in the presence of a foolhardy enterprise, have more than once given me pause.
If, however, notwithstanding these incessant fears of mine, and the caution they so naturally inspire, I have, from other considerations, suffered myself to be hurried away into statements which may appear crude or inconclusive, I cast myself at the outset on the kindness of my readers, ^nd respectfully bespeak their indulgent regards.
The essential defect of this book will, without doubt, lie in its incompleteness. Of this I am myself all too sensibly conscious; but I trust that the reader will be kind enough to attribute this defect to the impatience of the author, and not to anything inherent in the work itself, which, if owing to its modest proportions and imperfect construction, it offers little in itself, does, if I do not deceive myself, nevertheless supply a secure enough framework upon which others may hereafter weave a stronger, more compact, and more comprehensive history of comparative mythology.
I am well aware that mythical and legendary lore could offer me ten or twenty times as much material as I have here elaborated, which I might, with more leisure-time and more exemplary patience, have collected, examined, sifted, and sorted, so that when I had come to the end — which, however, is perhaps infinite — of my work, my humble octavo volume would have probably assumed the respectable proportions of a colossal folio; and that I might, in many instances, have improved the arrangement, filled up gaps, demonstrated better the validity of certain hypotheses, which, as it is, may seem to be built upon the air, and .have perhaps even modified some secondary hypotheses by new materials of conjecture. But the fear, which is always present to the student, that his life may come to an end before he can complete his last and naturally most cherished design, obliged me, at whatever hazard to myself, to hasten the progress of my work, like the son of the fabled hero, who grew, not year by year, but day by day and hour by hour.
And this slender product of the talent and researches of an Italian, which a well-deserving English publisher has been good enough to honour with his confidence, while it may possibly throw a ray of light here and there upon a field which is almost unexplored, will too often seem like the essay of a precocious youth and betray too obviously an insufficient maturity. It was, however, almost impossible, from the novelty of the undertaking, to escape being seduced into unknown bypaths, and being tempted at times to make an over-hasty observation; yet I am sustained by lively confidence that the book may help its reader to understand the great historical principle which presides over and regulates the develop men of zoological mythology, from its primary formation up to its more recent traditional forms, and may also demonstrate, beyond the possibility of a doubt, the necessity of henceforward connecting in one study that which is properly called m3rfchology, with all the immensely popular traditional lore, edited and unedited, which is contained in poems, legends, songs, popular tales, proverbs, and superstitious beliefs.
Contents :
I. The animals of the earth.--II. The animals of the earth (cont.) The animals of the air. The animals of the water
book details : Download PDF ebook 14.2 MB