Why women are so 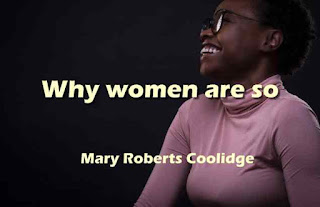 These chapters are neither a defence nor an arraignment of womankind; they are, rather, a first-hand study of the ordinary, orthodox, middle-class women who have constituted the domestic type for more than a century; the exotic great lady and the morbid woman with a grievance have alike been omitted. They try to answer the query: why are women so? Is the characteristic behaviour which is called feminine an inalienable quality or merely an attitude of mind produced by the coercive social habits of past times?
As a working hypothesis it is assumed that the women of the nineteenth century in America were for the most part what men expected them to be; modified only by the disintegrating, and at the same time reconstructive, forces of modern society. In other words, sex traditions rather than innate sex character have produced what is called " feminine " as distinguished from womanly behaviour.
Some contents of the book:
SECTION I THE DOMESTIC TRADITIONS
I. THE CONVENTIONS OF GIRLHOOD j
II. THE GREAT ADVENTURE 20
III. THE CAREER OF MOTHERHOOD 42
IV. DOMESTICITY AS A VOCATION 65
SECTION II THE EFFECT UPON WOMEN
V. THE FEMININE TEMPERAMENT .... 89
VI. BEAUTY AND WEAKNESS 108
VII. THE PURSUIT OF DRESS 130
VIII. CLOTHES AND CHARACTER 148
IX. THE VIRTUES OF SUBSERVIENCE . . . .169
SECTION III SOME EXCEPTIONS
X. THE ELECT AMONG WOMEN 191
XI. THE PHANTOM OF THE LEARNED LADY . . . 219
XII. WOMEN INSURGENTS 243
XIII. LITERARY AMATEURS . .... 271
book details :
Download Why women are so - 9.4 MB