Race and history by Claude Lévi-Strauss 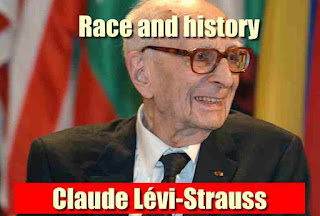 It may seem somewhat surprising, in a series of booklets intended to combat racial prejudice, to speak of the contributions made by various races of men to world civilization. It could be a waste of time to devote so much talent and effort to demonstrate that, in the present state of scientific knowledge, there is no justification for asserting that any one race is intellectually superior or inferior to another, if we were, in the end, indirectly to countenance the concept of race by seeming to show that the great ethnic groups constituting humankind as a whole have, as such, made their own peculiar contributions to the common heritage. Nothing could be further from our intentions, for such a course of action would simply result in an inversion of the racist doctrine.
To attribute special psychological characteristics to the biological races, with a positive definition, is as great a departure from scientific truth as to do so with a negative definition. It must not be forgotten that Gobineau, whose work was the progenitor of racist theories, regarded "the inequality of the human races" as qualitative, not quantitative; in his view, the great primary races of early man — the white, the yellow and the black — differed in their special aptitudes rather than in their absolute value. Degeneration resulted from miscegenation, rather than from the relative position of individual races in a common scale of values; it was, therefore, the fate in store for all mankind, since all mankind, irrespective of race, was bound to exhibit an increasing intermixture of blood.
The original sin of anthropology, however, consists in its confusion of the idea of race, in the purely biological sense (assuming that there is any factual basis for the idea, even in this limited field — which is disputed by modern genetics), with the sociological and psychological productions of human civilizations. Once he had made this mistake, Gobineau was inevitably committed to the path leading from an honest intellectual error to the unintentional justification of all forms of discrimination and exploitation.
When, therefore, in this paper, we speak of the contributions of different races of men to civilization, we do not mean that the cultural contributions of Asia or Europe, Africa or America are in any way distinctive because these continents are, generally speaking, inhabited by peoples of different racial stocks.
If their contributions are distinctive — and there can be little doubt that they are — the fact is to be accounted for by geographical, historical and sociological circumstances, not by special aptitudes inherent in the anatomical or physiological make-up of the black, yellow or white man. It seemed to us, however, that the very effort made in this series of booklets to prove this negative side of the argument, involved a risk of pushing into the background another very important aspect of the life of man— the fact that the development of human life is not everywhere the same but rather takes form in an extraordinary diversity of societies and civilizations.
This intellectual, aesthetic and sociological diversity is in no way the outcome of the biological differences, in certain observable features, between different groups of men; it is simply a parallel phenomenon in a different sphere. But, at the same time, we must note two important respects in which there is a sharp distinction. Firstly, the order of magnitude is different.
There are many more human cultures than human races since the first are to be counted in thousands and the second in single units; two cultures developed by men of the same race may differ as much as, or more than, two cultures associated with groups of entirely different racial origin. Secondly, in contrast to the diversity of races, where interest is confined to their historical origin or their distribution over the face of the world, the diversity of cultures gives rise to many problems; it may be wondered whether it is an advantage or a disadvantage for humankind, and there are naturally many subsidiary questions to be considered under this general head.
Last and most important, the nature of the diversity must be investigated even at the risk of allowing the racial prejudices whose biological foundation has so lately been destroyed to develop again on new grounds. It would be useless to argue the man in the street out of attaching an intellectual or moral significance to the fact of having black or white skin, straight or frizzy hair, unless we had an answer to another question which, as experience proves he will immediately ask: if there are no innate racial aptitudes, how can we explain the fact that the white man's civilization has made the tremendous advances with which we are all familiar while the civilizations of the coloured peoples have lagged behind, some of them having come only halfway along the road, and others being still thousands or tens of thousands of years behind the times?
We cannot, therefore, claim to have formulated a convincing denial of the inequality of the human races, so long as we fail to consider the problem of the inequality — or diversity — of human cultures, which is in fact — however unjustifiably — closely associated with it in the public mind.
the book details : Download 3 MB -Booklet contains 64 Pages