The original sources of the Qur'ân 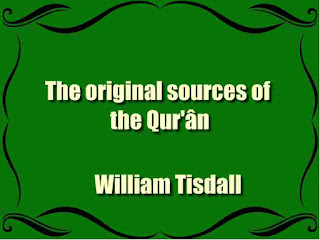 This work which is now offered to the student of Comparative Religion is the result of many years of study of various Oriental Religions ancient and modern. Except in Chapter IV, where I have made much use of Rabbi Abraham Geiger s " Was hat Mohammed aus dem Judenthume aufgenom- men ? " I am not to any great extent indebted to any others who have laboured in the same field. Wherever I have been conscious of any indebtedness, I have fully acknowledged it in the text or notes. An investigation of the sources from which Islam has sprung would be valueless unless based upon a thorough personal study of the various ancient records quoted.
This I can honestly claim to have undertaken. All the translations I give, from whatever language, are my own, except one or two passages from the Chinese, which language I have not carefully studied. The translations which I have in every other case given are as literal as possible, in some instances too literal to be elegant.
But it seemed to be necessary to be exact in order to place the reader in a position to judge for himself the correctness or incorrectness of my arguments. In each case, I have ^iven references to the works in which the translated passages will be found in the original languages. I have used an exact system of transliteration for Arabic names (except in the case of the cities of Mecca and Medina), but it is one which to Arabic scholars will need no explanation. A shorter work of mine on the same subject appeared in Persian in 1900, under the title of YandbMl Islam.
It was very favourably reviewed 1 by that veteran scholar Sir W. Muir, to whom all students of Islam are so much indebted for his able works on the history of Muhammad and his successors, and has since been translated into Urdu and Arabic. Sir W. Muir has also published an English epitome of the little book.
The present work is the result of further study and has been written at the invitation of many friends, who wished to have the whole matter treated from an English standpoint, which was undesirable when I first dealt with the subject in an Eastern tongue and therefore from an Oriental point of view.
book details : Download  11 MB