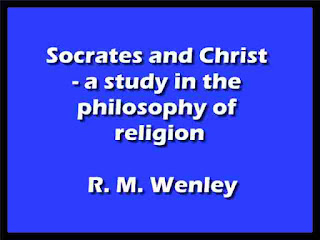 This brief study, covering as it does a wide and preeminently important period of human history, is not in any way exhaustive.
Of its shortcomings in many directions, I am deeply sensible. Throughout, the design has been to group afresh ascertained facts, to exhibit their inter-connection, and to emphasise their essential differences, rather than to bring forward evidence which had been neglected or even unnoted hitherto. An attempt has been made to show that the development of Greek thought and the peculiar character of Judaism necessarily rendered Christ s work different from that of Socrates.
While dogmatic theology undoubtedly contains very many elements derived from Greek philosophy, Christianity at its source is in no wise Greek. Philosophy partly prepared the way for it and originated not a few doctrines which afterwards became incorporated in Christian dogma. This, however, was only a secondary relationship.
It has been my endeavour to eliminate doctrinal considerations as far as possible and to lay stress on what is inherent in the Christian religion. As a study in the Philosophy of Religion, which "seeks to ascertain how much of the content of religion may be discovered, proved, or at least confirmed, agreeably to reason," the book aims at being constructive and not controversial. N
o pretence is made to trench upon disputed points of creed. I am indebted to many sources of information, and I have tried to indicate my main obligations in the notes. It need scarcely be said that without the venerable Zeller s monumental work this study could not have been undertaken. I should like to add that, in their various departments, the books of Drs Jowett, James Drummond, Kuenen, Wellhausen, and Keim, have been of the utmost assistance.
But these writers are in no way to be held responsible for the errors into which I may have fallen. It may be of interest to state that direction was first given to this review by the preparation of an essay to which the Rae- Wilson Medal at Glasgow University was awarded in 1883. But no part of that dissertation has been reproduced here.
Contents:
I. Introductory Socrates and christ, . . 1
Ii. The antecedents of Socrates, . 13
Iii. The mission and philosophy of Socrates, . 31
Iv. From Socrates to Zeno, . . H-q v. The search for independence and wisdom, . 83
Vi. Scepticism, complacency, and superstition, 126
Vii. The importance of the contact between jew
And greek, . . . 149
Viii. Philo-judeus and his significance, . . 163
Ix. The Jewish ideal of god, . . 183 ^
X. Judaism and Jesus, 201
Xi. Socrates and Christ, 236
Index,
book details : Download 15.7 MB - PDF ebook