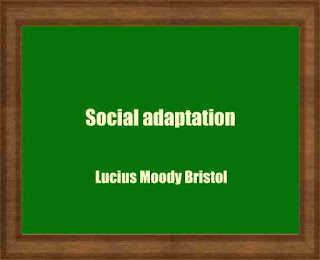 a study in the development of the doctrine of adaptation as a theory of social progress.

From the introduction:
The doctrine of biological evolution did not originate with Darwin or with any other modern scientist. It is as old as human speculation. Darwin's supreme contribution was his positive proof that the method of evolution was the method of natural selection, of trial and rejection, of extermination and survival. Since his day biological evolution has meant a definite process capable of being studied in detail, tested and verified. Before his time it was only a generalization, a guess as to how things might very well have been, without any definite proof that they were actually so.
The concept of social evolution has gone through or is going through, a similar course of development. This concept also is as old as human speculation. It has generally been, however, only vague speculation, a guess as to how things socially might conceivably have come about, a vague idea of an unfolding process. A little more definiteness has come into the theory by the attempt to trace the successive stages of evolution.
A treatise on this subject, however, is rather a book of social genesis than a book on social evolution. Until someone is able to point out the factors and forces which bring about social evolution, to show the method and the process, it will not have become a scientific concept. In fact, Comte's three stages of mental development are beautifully illustrated in the development of the concept of social evolution. The theological stage is represented by the doctrine of a divine providence moulding human history and leading mankind along by a preordained path.
The metaphysical stage is represented by most current theories of social evolution which only point out that society, like a biological organism, grows, and that its growth presumably is the result of some impersonal.
The world was prepared to believe much more easily in Dar- win's theory of biological evolution than it is today prepared to believe in a similarly definite doctrine of social evolution. It is true that Darwin's theory ran counter to certain traditional theological beliefs of that day. The real concept of social evolution will run counter to much deeper currents of belief and tradition that still persist in the world in this twentieth century.
It will necessitate a complete reorganization of our theories of morals, and of most of the ideals of the cultured classes. When it is stated, for example, by a great biological evolutionist, that nature is non-moral, or that one is not able to discern a moral order of the universe, the issue is pretty squarely drawn and the fundamental conflict of ideas is very clearly presented. It literally means that the person who makes such a remark is not yet prepared to apply the method of evolution to morals, social ideals and religious concepts.
The method of evolution is not simply a recognition that things go through certain processes of development. Many people imagine themselves to be moral evolutionists when they admit that moral ideals change and develop. They are not real evolu- tionists until they are willing to recognize that the processes of natural selection, of trial and rejection, of extermination and survival apply to moral principles and social ideals as well as to biological forms.
To say that nature is non-moral is merely to say that one is not able to see that nature recognizes what one has been taught to believe to be moral. To say that one cannot discern a moral order of the universe is merely to say that one cannot perceive that the order of the universe harmonizes with what one has believed to be moral.
Until one is prepared to face about and say that nature is moral and that if it does not harmonize with what we have previously believed to be moral, that is a demonstration that our ideas of morality have been wrong, or that if he cannot discern a harmony between the order of the universe and his system of morals, that is a demonstration that his system of morals is wrong, he is not a true evolutionist. In other words, one must admit that whatever the order of the universe is, that is the moral order.
Some contents:
PART I
Introduction 3
CHAPTER I
Auguste Comte. Comic's Positive Philosophy a Prolegomenon to sociology 12
CHAPTER n
Herbert Spencer. Cosmic Evolution. 29
Sociological Methodology:
L. A. J. Qu^telet. The Statistical Method 43
Paul Von Lilienfeld. The Analogical Method 47
Guillaume De Greef. Classification as a Method of Sociological
Knowledge 49
PART II
PASSIVE PHYSICAL AND PHYSIO-SOCIAL ADAPTATION
CHAPTER IV
Biological Evolution:
Jean Baptiste de Lamarck. Use-Inheritance 56
Charles Darwin. Natural Selection 58
August Weismann. Continuity of the Germ-Plasm 68
Hugo de Vries. Mutations 70
Johann Gregor Mendel. Independent Unit Characters . ... 71
CHAPTER V
Neo-Darwinian Sociologists:
Friedrich Nietzsche. Evolution of the Super-Man 80
Benjamin Kidd. Religion and Social Progress 85
Galton and Pearson. National Eugenics 92
Vacher de Lapouge. Societal Selections 99
the book details :
Download 17 MB