The nomads of the Balkans 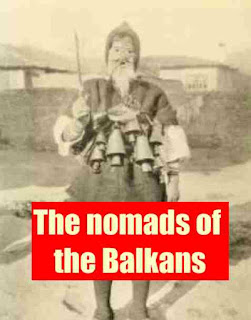 Excerpt:
OF the various races that inhabit the Balkan peninsula the Vlachs are in many ways one of the least known. Though at one time of sufficient importance to give their name to the greater part of Northern Greece, during the last few centuries their existence as a separate people has almost been forgotten.
At the present day, they are to be found widely scattered over the more mountainous and remote parts of the peninsula from Acarnania in the south to as far north as the mountains of Bulgaria and Serbia. Their settlements are all small, there is no such thing as an exclusively Vlach town and nowhere do they occupy any large continuous tract of country.
One of their chief districts in the south is along the wooded slopes of Northern Pindus between Epirus and Southwestern Macedonia. The higher of the villages on the Pindus is under snow each winter and each year as soon as summer ends most of the inhabitants move down to the plains with their flocks and herds, taking with them whatever is needed to carry on their trade.
Thus for the six winter months, there is a large Vlach population living in the plains of Thessaly and Macedonia; Velestinos, for the time being, becomes almost a Vlach town, and numerous Vlach families take up their abode in Trikala, Larissa, Elassona and the other towns and villages nearby.
The villages in the hills however are always regarded by the Vlachs as being their real home; they are essentially a mountain people and as soon as they begin to settle permanently in the plains, as many have done in the past, far away from their native hills and woods and streams they lose their national characteristics and rapidly become merged into the surrounding races.
Their language both in its vocabulary and structure is clearly descended from Latin — so much so that a Latin grammar solves many of the difficulties — and is closely allied to Roumanian, of which it is, in fact, a dialect. But like all the Balkan languages in their common spoken forms, Vlach contains a large number of foreign words and phrases, borrowed from Greek, Slavonic, Turkish and Albanian, the proportion from each varying in the different districts.
The earliest record of spoken Vlach goes back to the sixth-century a.d., but it seems not to have been written till the eighteenth century when a Greek script was employed. Since the beginning of the national movement about the middle of the last century, the Roumanian alphabet has been adopted. Excepting some of the women in certain of the more remote villages all the Vlachs of both sexes know in addition to their native language at least one other tongue, either Greek, Bulgarian, Albanian or Serb.
In the case of the women however this is largely a modern development for only fifty years ago in an accessible village-like Metsovo few knew any other language but Vlach; the men, on the other hand, owing to the necessities of trade has almost certainly been bilingual for many generations.
The Vlachs call themselves ' Romans,' or in their own dialect Armani, which is really the same word, just as the Greeks still commonly call themselves ' Romei' and their language ' Romeika.' By the Bulgarians, Serbs and Albanians the Vlachs are known as Tsintsars which is a nickname derived from the numerous hissing sounds in Vlach suggestive of mosquitoes. Thus the Roumanian cinci (five) is in Vlach tsintsi. By the Greeks, the Vlachs are known as Vlakhi or more accurately as Kutsovlakhi. The name Vlach which is a shortened form of Wallach occurs in many languages and is perhaps in origin connected with the name Welsh.
In Greek, it is now and has been for some time past often applied to all wandering shepherds without denoting any particular race, so that its meaning is not always clear. We have nevertheless used it throughout, but always with a racial meaning as it is the most familiar name in Western Europe. The origin of the name Kutsovlach, which invariably has a racial significance, has been disputed.
According to one theory, the first part of the word comes from the Turkish Tkachuk little, and in this case, the Kutsovlachs would be the little Vlachs of the Balkans as opposed to their more numerous kinsmen north of the Danube.
the book details : Download The nomads of the Balkans - 16 MB