The mutual influence of Muhammadans and Hindus 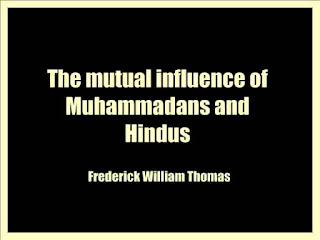 The mutual influence of Muhammadans and Hindus in law, morals, and religion during the period of Muhammadan ascendancy. Being the 'Le Bas' prize essay for 1891
This essay, which is published in accordance with the conditions attached to the Le Bas Prize, aims at portraying the changes in Law, Morality and Religion, which Muhammadanism caused and sustained during the period of its supremacy in India. Covering so wide a range of research, it is naturally under considerable obligations to previous writers.
To enumerate these in full would be superfluous since specific acknowledgements are made at the foot of each page. But that indebtedness which is too considerable to be acknowledged in notes should not be passed over here. The introductory chapter, which attempts by depicting the characteristics of Hinduism and Muhammadanism to elucidate the conditions of the problem, is of such a nature as to dispense for the most part with references.
The pages treating Hinduism were written almost without consultation of books by the light of previous reading. For the latter portion I have availed myself of many of the best-known descriptions of Muhammadanism, in particular of the article in the Encyclopaedia Britannica, Hughes' Dictionary of Islam, the Quran and the notes of Palmer and Wherry, along with Sale's Preliminary Discourse, the Lives of Mahomet, especially those by Sir William Muir and Syad. Amir All, Sir Syad Ahmad Khan's Essays, and Sir William Muir's Annals of the Early Khali/ate.
I am under especial obligations to A. von Kremer's Culturgeschichte des Islam unter den ersten Khalifen ; the same author's Geschichte der herrschenden Ideen des Islam I regret not to have had access to. The chapter on Law and Government is based on the various Histories of India, the native codes Manu Narada &c., Tod's Annals of Rajasthan, the Travels of Hiuen-Thsang, Fa-Hian, and Albiruni, and some general reading of Sanskrit literature and antiquities. On the subject of land-tenure, I have made much use of Baden-Powell's Land-systems of British India, and Phillips' Tagore Law Lectures for 1875, as well as original documents such as the Ain-i-Akbari and the Fifth Report of 1812. In the discussions on Morality and Religion, the references are from the nature of the case more scattered, and as I have acknowledged in the notes all the indebtedness of which I am conscious, little need be said here.
Yet I should make mention of the works of Barth and Monier- Williams and Garcin de Tassy's brief treatise on certain Particularities de la Religion Musulmane Dans I'lnde. The best accounts of the customs and rites of the Indian Musalmans are contained in Mrs Meer Hassan Ali's Observations on the Indian Mussulmauns, 1832, and Herklots' Qanoon-i-Islam, published in the same year. The concluding 'Retrospect and Forecast,' consisting mainly of inference and a summary of present circumstances and prospects, is of a less positive character.
The opinions there expressed are, except where otherwise stated, either everyone's or my own, and the whole is open to dispute in a greater measure than the matter of the other chapters. On the subject of the Wahabis, I have consulted, besides more obvious sources of information, Burckhardt's Notes on the Bedouins and Wahabees? Brydges' History of the Wahabis, and Palgrave's Travels in Central and Eastern Arabia. So far as the history of the movement in India is concerned, we have an article in the Calcutta Review for 1870, Sir W. W. Hunter's Our Indian Musalmans, with the criticisms of Sir Syad Ahmad Khan and Sir Alfred Lyall, and letters by Colonel Nassau Lees and others in the Times for 1871. There are also many scattered but authoritative statements in the Imperial Gazetteer of India and the Gazetteer of Bengal.
book details : Download 7.4 MB