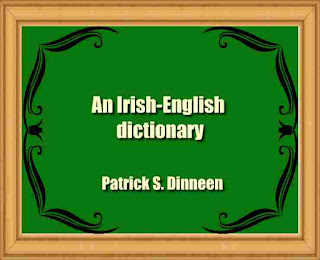 An Irish-English dictionary, being a thesaurus of words, phrases and idioms of the modern Irish language, with explanations in English

This Dictionary of the modern Irish language, with explanations in English, is the outcome of a project conceived a few years ago by the members of the Council of the Irish Texts Society.
On the initiation of Mr G. A. Greene, M.A., then Vice-Chairman of the Council, they decided to compile, with the assistance of Irish speakers and scholars throughout Ireland and Great Britain, and under the direction of competent Editors, a small Irish-English Pocket Dictionary for the use of students of the modern tongue. As a foundation for this work, about 12,000 words were collected from existing glossaries, from the spoken language and from modern writings, and sorted into slip form.
The Editors who were asked to carry out the task of editing this material, Father O'Leary and Mr David Corny n and, at a later stage, Mr John MacNeill, found themselves, through the pressure of other work, unable to fulfil their intention, and the help of Father Dinneen was eventually secured. In carrying out his views as Editor, Father Dinneen found it necessary to make any alterations on the slips handed to him, involving labour which would not have been incurred had he been appointed in the first instance. Indeed, Father Dinneen has so amended and expanded the fragmentary materials submitted to him, that the present work may be regarded as practically his creation, and the Council gladly acknowledges its indebtedness to him for his severe and patriotic labours in bringing the work to a satisfactory conclusion.
The members of the Council wish to add their own sincere thanks to those of the Editor to all those gentlemen who have assisted the undertaking, either by reading proofs, or by the compilation of lists of local words, or by personal assistance rendered in different ways to the Editor. The names of those who have given financial aid will be found at the end of the volume.
These marks of kindness and interest in the work have been of the greatest service, and have afforded much encouragement both to the Council and to the Editor.
The study of the Modern Irish Language, which has received such an impetus in recent years, has been greatly hampered by the want of a convenient lexicon. Nothing but the urgent necessity that existed for such a lexicon could have induced me to abandon more congenial studies and devote my energies to the development and completion of the work so laudably undertaken by the Council of the Irish Texts Society.
As I proceeded with the revision of the material supplied me the work grew imperceptibly under my hands. In preparing the work, I went through the whole of Peter O'Connell's MS. Dictionary, and also, though more rapidly, through the MS. Dictionary compiled by O'Naughton. The Gaelic Journal and the principal modern published texts were also laid under contribution, as well as several lists of words received from various parts of the country
Not the least valuable part of the work is what I was able to remember from the days of my childhood, the rich vocabulary employed by my father and mother and the inhabitants of my native Sliabh Luachra, the snatches of song, of story, of the proverb, the allusions and rhymes and exclamations which mingled with their conversation, as well as the precise and accurate use of phrase and idiom which distinguished them.
Example: