How to deal with human nature in business 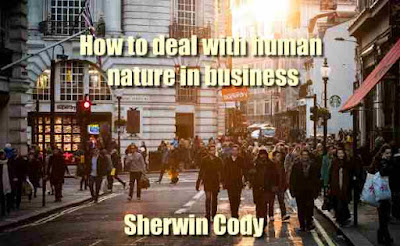 a practical book on doing business by correspondence, advertising and salesmanship

From introduction:
The words science and scientists have been used so much as advertising catchwords, in loose and illegitimate senses, that it is well for us to begin by considering just what is the true scientific method, and how far the knowledge of any subject is or may become a science.
The scientific method follows these well-defined steps:
1. Hypothesis. The scientist makes the best guess that he can. He is a real student, an artist in the study, a professional studier, and he sees something that looks like a great discovery. A hypothesis is a name for a serious guess by a brilliant mind.
2. Experiment and test. The very essence of modern science is trying out that which seems like a great discovery. What seems is often false. We are deceived in our very best impressions. We have not looked at the thing closely enough, we are deceived as to its relative importance, its proportions, because we are too near to it or too far from it, or there is some practical defect in its working which we overlooked at first.
The wiser a man is, the more likely he is to know that there are many times when he can not avoid an error. Science is what we know, and the only way to know anything is to test it, to try it here and try it there. When its appearance remains the same after we have looked at it from many different sides, only then do we begin to know that it is as it looks.
3. Theory. When our hypothesis has been tested until we find it a very useful assumption, something that helps us explain many other things, but about which xii we know there is the possibility that we may be making a mistake, we say that we have a working theory. 4. Law. When a theory has been tested on every possible side on which there can be any doubt, and the man with a scientific mind knows absolutely that there is not a single chance left that he can be wrong, the principle which at first was a guess, a hypothesis, and then by experiment and test became a theory, at last, on the finishing of every possible experiment, becomes a law. Usually, a good many different minds must unite in the experiments which finally confirm what we accept as a scientific law.
Only that is a science that is known so thoroughly that careful thinkers in many different parts of the world agree on its working theories and demonstrated laws. No one man, even the wisest man in the world, could make a science. Anyone man who talks about "scientific" a subject simply does not realize the dignity and thoroughness of knowledge that go to make up our real sciences such as chemistry, physics, astronomy, and (on the side of dealing with human nature) the science of psychology, and the science of sociology (the youngest of the sciences, what might be called a baby science). Philosophy can not be a science, because it deals with things we know we can not really know. Much less can religion be a science, because it deals very largely with things beyond the range of human knowledge? Moreover, scientific names, scientific terminology, are not essential parts of science.
In order to know exactly what you are talking about, it is desirable to have fixed and accurate names. For example, in botany, it was found that common names of plants were used differently by different people.
One name would be used by some people for six or seven different kinds of plants. Also, different languages such as English, French, or German had entirely different common names. For an Englishman really to know what kind of flower or plant a German was talking about, it was desirable to have a name which would be the same in Germany and in England. So Latin names were agreed on, and the different kinds of plants examined scientifically were given names that were accepted in all parts of the world.
The names, however, are only a convenience, and unless convenience actually requires special names, and those names can be accepted and used by many different authorities on that science, a terminology in- vented by someone is worse than a nuisance. Under the general subject of Dealing with Human Nature we have two young but distinct sciences, psychology, the science of the way the mind acts on the impressions it gets through the five senses, and sociology, the science of social relationships, or the organization of society. Salesmanship and advertising have just as much chance of sometimes becoming sciences as sociology.
The reason they are not now sciences is that no considerable number of persons who have studied them as subjects agree on their fundamental principles. They are a collection of hypotheses, with a few working theories, but no laws.
Human nature is a very complicated thing, so wholly dependent on changing conditions that it is exceedingly difficult to arrive at anything that will seem equally true to all people at all times. Sociology has the advantage of the records of all history.
The practice of salesmanship and advertising is so recent that we do not really have much data. There is, however, an art of salesmanship, and an art of advertising.

Prefatory a scientific basis
Part I human nature: how to handle it
I. National characteristics 3
Ii. Service the American principle of business 7
Iii. The business world takes your own valuation of yourself 11
Iv. Every man should have his monopoly 16
V. The mind and how it works .... 19
Vi. Practical uses of the imaginative method 36
Vii. Practical principles of appeal ... 41
Viii. Proportion and emphasis 52
Ix. Analyzing a business 57
Part ii correspondence
Introductory the form of the letter . . .67
3. How to write a letter that will develop interest 132
Letters to get life insurance business.
4. How to write a letter that will compel an answer 136
5. How to do business with a reasonable customer 140
A system to keep reasonable customers satisfied.
6. How to do business with an irritable customer 144
Nagging letters and how to handle them.
7. How to do business with a woman. 147
The difference is due to women.
8. How to write to a lady on a delicate matter 151
Delicate letters a frank letter to an employee.
9. Giving a letter the proper tone how
To write to your superior .... 154
10. How to write to a subordinate . . . 158
V. Collections by mail 163
Personality 393
The advantage of having good clothes
The advantage of having good manners
The advantage of having a good breath
Questions on personality in salesmanship.
Ii. Different kinds of salesmen and their duties 403
1. Retail 403
2. Wholesale. 406
3. Specialty .411
the book details :
Download 28.4 MB