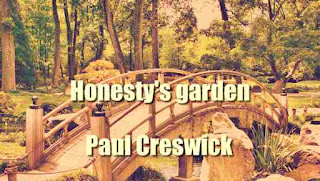 Paul Creswick (1866-1947) is the author of numerous children's books, most notably Robin Hood and His Adventures. His other works include In Ælfred's Days.
Excerpt from the novel:
A speckled thrush, puffing his plum chest, called once — twice — from the highest twig on the highest branch of the pear tree near my window. I heard presently answering notes, slightly petulant, perhaps. The rain had fallen sweetly during the night, turning all the lumpy, hard ground soft and fragrant, and cleansing the rose trees of blight.
The close lawn was sparkling under the early sun, as though sprinkled by some lavish magic hand with millions of diamonds. Already the sun was well above the hills across the valley, flinging slant rays reproachfully towards us.
The cuckoo's sly notes sounded from the deep woods beyond the village; he invited folk to awake — to leave their warm nests. The thrush whistled again from his perch peremptorily, then dropped swiftly to the grass.
There was something amid the diamonds of dew really remarkable! After a fitting interval came the good lady. She had finished preening her feathers, and now deigned to flutter her sleek round self nearer her fussy lord and master. She eyed the wriggling morsel which he had captured with a fine air of disdain. " Whatever 's that? " she asked plainly, her head on one side.
Then, before he could attempt an explanation, " Pray don't speak with your beak full, dear — it's such a bad example for the chicks. Besides, it doesn't suit you! " She condescended to accept the tit-bit, however, and at once flew off to the nest. Such a twittering now! I could imagine the scene: three or four hungry, tremendous mouths all clamouring together to be served first! Typical little birds obey prime instincts. Honesty awoke — who could sleep through such a din? I heard her casement opening wide, and drew back into the dimity shadows of my own curtained window. A gentle puff of fresh pure wind, pungent with aromatic savours, greeted her. " Bless the birds! " I expect she said, smiling to hear the uproar in the thrush's nest; " how very early they do wake up! "
Then crossing to her glass, and smothering tiny yawn, she concluded (no doubt), "What a fright I look!" I can only guess at Honesty's words, but I expect she either said or thought just what I have written. I am always careful to open and close my window very gently; a summer's morning is a wonderful business, not to be disturbed by harsh sounds or by the unmannerly intrusion. Much of the garden can be seen from my room — all the bushes and taller plants, while the long sweep of close turf peeps between the whispering trees very refreshingly. Soon I see Honesty herself, pink in her cotton dress, bareheaded, with big gloves on her small hands, and with sharp scissors snipping a bouquet. Honesty is really the spirit of the place.
This busy little maid, experienced twenty whole summers, enters unassumingly, and — presto! — the garden is worth a thousand thousand times its value of a moment before. What quick, deft fingers has she, despite those clumsy gloves! I see a cloud of bright blossoms filling her gathered-up apron, stains of deeper pink against the pale pinkness of her dress, roses shy and sweet crowding each other in lovely disorder. Is it fair to watch Honesty like this? I think yes — for surely God sent us pretty things that we might look upon them, and so learn how to be beautiful.
the book details : Download 12.4 MB