From the unconscious to the conscious 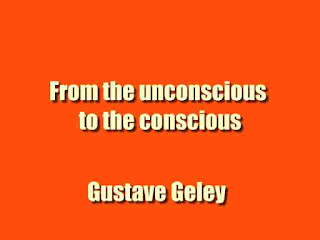 From the translator's note:
To many people, the nineteenth century seems to be the age of great consummation. In the course of that century, the material sciences were freed from the shackles that had held them, and the work of the great pioneers, Newton, Franklin, Kepler, Lamarck, and the rest was developed with amazing rapidity and resource.
And to those who came to maturity in the last decades of this remarkable period, the material sciences still appear to be the consummation of man- kind's intellectual opportunity. Just as our forefathers opposed and sneered at the coming of Science, so these representatives of the great materialistic age resent and combat the greater promises of our own time. For them, Charles Darwin is still the splendid discoverer of man's origin and they dread the coming of the finer and more inclusive theory of Being which will turn Darwin's Descent of Man and The Origin of Species into interesting relics of an old and superseded mode of thought. For as the earlier reactionaries were powerless to oppose the * march of science ' so will these conservative scientists of our own day be borne down under the mass of the accumulating evidence. Darwin's theory that natural selection coupled with the influences of the environment were the sole instruments by which the process of physical and intellectual evolution was achieved, has failed to explain the facts.
For more than twenty years now, a newer school of thought has been throwing doubt on these so-called classic factors of evolution; and, in my opinion, the work of Dr Geley not only confirms these doubts beyond all dispute, but Introduction also— and this is, indeed, the greater achievement — gives us a new and larger theory of the origin and constitution of life.
Of the content of the present work, however, I do not propose to speak in detail, but I will say that I have found in it the evidence of a new classic. I believe that, in fifty years' time, Dr Geley's From the Unconscious to the Conscious will be looked upon as bearing the same kind of relation to the discoveries of the twentieth century that Darwin's Origin of Species bore to the nineteenth.
This may sound rather an extravagant claim to make, but if Geley's theory is, as I believe, a true one, it must inevitably revolutionise our knowledge both of biology and psychology, and may, at the same time, lay the foundations of a worldwide religion. And we must remember that Dr Geley comes before us backed by the authority of the practical scientist and scholar.
His medical works have already brought him a measure of fame, both in the study of local anaesthetics and of the new method of treating such specifically eruptive diseases like smallpox, erysipelas, and scarlatina. He is not a "spiritualist," he refuses to identify himself with any particular school of thought, but an original researcher. He was chosen by scientific men of the highest standing and repute, such as Professor Charles Richet and Camille Flammarion, to be the Director of the International Metapsychical Institute in Paris.
In short, Dr Geley is not some impetuous theorist rushing into print with a premature hypothesis, but a patient, unprejudiced investigator, whose sole aim is the search for truth.  In the opening chapter of the Origin of Species Darwin states that the "variability,' on which selection and adaptation have to work, * is governed by many unknown laws.
In translating a book which fills this gap in the Evolutionary Theory by assigning a psychic cause as the origin of Variation (thus traversing the arguments of later biologists who refer that origin to chance or to the pressure of the environment); a book which modifies the conclusions of many schools of thought, both new and old; which replaces Bergson's famous elan vital by concrete energy, and defines that energy as an influence forming all the varieties of cellular tissue out of one primordial substance, and moulding those tissues into organic form under the impulsion of a Directing Idea, the translator has a most responsible task. One duty, and one only, lies upon him — to be faithful to the author's meaning.
No attempt at the literary finish can palliate or excuse the slightest departure from that duty in a work which, however scientific in essence, is necessarily somewhat controversial in form. When to this duty there are added the obligations which the honour of personal friendship involves, faithfulness in rendering the idea becomes doubly imperative. To this, all other considerations must give place.
the book details : Download 8.4 MB