A history of freedom of thought 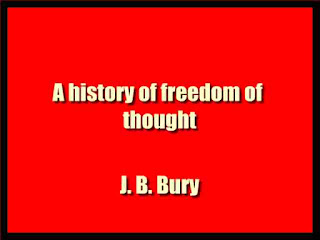 It is a common saying that thought is free. A man can never be hindered from thinking whatever he chooses so long as he conceals what he thinks.
The working of his mind is limited only by the bounds of his experience and the power of his imagination. But this natural liberty of private thinking is of little value. It is unsatisfactory and even painful to the thinker himself, if he is not permitted to communicate his thoughts to others, and it is obviously of no value to his neighbours.
Moreover, it is extremely difficult to hide thoughts that have any power over the mind. If a man's thinking leads him to call into question ideas and customs which regulate the behaviour of those about him, to reject beliefs which they hold, to see better ways of life than those they follow, it is almost impossible for him, if he is convinced of the truth of his own reasoning, not to betray by silence, chance words, or general attitude that he is different from them and does not share their opinions. Some have preferred, like Socrates, some would prefer today, to face death rather than conceal their thoughts. Thus freedom of thought, in any valuable sense, includes freedom of speech.
At present, in the most civilized countries, freedom of speech is taken as a matter of course and seems a perfectly simple thing. We are so accustomed to it that we look at it as a natural right. But this right has been acquired only in quite recent times, and the way to its attainment has lain through lakes of blood. It has taken centuries to persuade the most enlightened peoples that liberty to publish one's opinions and to discuss all questions is a good and not a bad thing. Human societies (there are some brilliant exceptions) have been generally opposed to freedom of thought, or, in other words, to new ideas, and it is easy to see why.
The average brain is naturally lazy and tends to take the line of least resistance. The mental world of the ordinary man consists of beliefs that he has accepted without questioning and to which he is firmly attached; he is instinctively hostile to anything which would upset the established order of this familiar world. A new idea, inconsistent with some of the beliefs which he holds, means the necessity of rearranging his mind; and this process is laborious, requiring a painful expenditure of brain energy.
To him and his fellows, who form the vast majority, new ideas, and opinions that cast doubt on established beliefs and institutions, seem evil because they are disagreeable. The repugnance due to mere mental laziness is increased by a positive feeling of fear. The conservative instinct hardens into the conservative doctrine that the foundations of society are endangered by any alterations in the structure.
It is only recently that men have been abandoning the belief that the welfare of a state depends on rigid stability and on the preservation of its traditions and institutions unchanged. Wherever that be- lief prevails, novel opinions are felt to be dangerous as well as annoying, and anyone who asks inconvenient questions about the why and the wherefore of accepted principles is considered a pestilent person.
The conservative instinct, and the conservative doctrine which is its consequence, are strengthened by superstition. If the social structure, including the whole body of customs and opinions, is associated intimately with religious belief and is supposed to be under divine patronage, criticism of the social order savours of impiety, while criticism of the religious belief is a direct challenge to the wrath of supernatural powers. The psychological motives which produce a conservative spirit hostile to new ideas are reinforced by the active opposition of certain powerful sections of the community, such as a class, a caste, or a priesthood, whose interests are bound up with the maintenance of the established order and the ideas on which it rests.
Let us suppose, for instance, that people believe that solar eclipses are signs employed by their Deity for the special purpose of communicating useful information to them and that a clever man discovers the true cause of eclipses. His compatriots in the first place dislike his discovery because they find it very difficult to reconcile with their other ideas; in the second place, it disturbs them, because it upsets an arrangement which they consider highly advantageous to their community; finally, it frightens them, as an offence to their Divinity. The priests, one of whose functions is to interpret the divine signs, are alarmed and enraged at a doctrine that menaces their power.