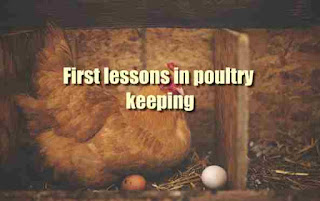 In talking up these two closely related subjects, I anticipate that the treatment of them which the facts bearing upon them require will be In a measure disappointing to many readers.
Outside of those who have made a somewhat thorough study of the principles of breeding, comparatively few people can be found who will come to a consideration of the subject without a prejudice against inbreeding, while among novices in poultry breeding "line breeding" is very commonly regarded as an elaborate scientific system of mating by which expert fanciers produce their finest specimens. Both of these attitudes are wrong.
The prejudice against inbreeding, though ages-old, almost universal, and supported by religious and social teachings, will not stand impartial Investigation. A reasonable test of inbreeding, with due^regard to recognized general principles of breeding, while it will not invariably give results which confound the claims of those who oppose it, will do so often enough to discredit their arguments, and demonstrate that their position is not tenable. Systematic line breeding, according to a prearranged "scientific" system designating the exact lines to be followed, and approximately the individuals to be used, is rarely practised by the best breeders.
Their " line breeding" plans are designed not to perpetuate certain bloodlines, but to secure certain results or establish certain characteristics. If the results they seek can be best obtained within the bloodlines which they are breeding they keep to those lines, or rather within certain lines; but they regard adherence to a particular line of breeding as a good thing only as long as it furnishes the best route toward the goal they seek the best means of attaining the ends for which they are working.
At any time that they see results in other lines which make it appear that blood from those lines might be introduced into their stock to advantage, they try to get such breeding specimens of those lines as seem most suitable for their purpose.
They use this new blood at first experimentally to learn what results will come from the introduction of the new blood. If results are satisfactory the new blood is gradually distributed through their whole stock, and with its introduction begins a new general line of breeding to be followed only as long as it gives better results than are to be obtained by other matings.
Now while the breeder does not bind himself to follow a certain line or system, and, theoretically, is free to introduce new blood at any time, in practice he does so only at long Intervals. The reasons for this will appear further on in this lesson. The two facts I wish to impress before taking up the special consideration of each of our subjects are 1. That inbreeding is neither a necessary evil nor necessarily an evil. That there is no virtue in line breeding except as it secures and fixes certain desired results.
book details : Download PDF ebook