Fairy legends and traditions of the South of Ireland 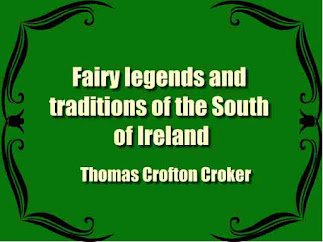 Contents:
The shefro.--The cluricaune.--The banshee.--The phooka.--Thierna na oge.--The merrow.--The dullahan.--The firdarig.--Treasure legends.--Rocks and stones
From the introduction:
The erudite Lessing styles a preface " the history of a book." Now, though there can be no necessity for a preface in that sense of the word to the reprint of a work of mere whim, which has been nearly ten years before the public, yet a few words are requisite to prevent the present condensed and revised edition from being considered an abridgement.
However compact may be the mode of printing adopted, the act of compressing into one volume the three in which the " Fairy Legends" originally appeared, involved to a certain extent the necessity of selection, per- haps the most difficult of all tasks judiciously to perform; but the following statement will show the system proceeded on. Forty tales descriptive of Irish superstitions now appear instead of fifty.
All superfluous annotations have been struck out, and a brief summary at the end of each section substituted, explanatory of the classification adopted, and in which a few additional notes have been introduced, as well as upon the text.
It is therefore hoped that this curtailment will be regarded as an essential improvement; some useless repetition in the tales being thereby avoided, and much irrelevant matter in the notes dispensed with, although nothing which illustrates in the slightest degree the popular Fairy Creed of Ireland has been sacrificed. At the same time, the omission of a portion of the ten immaterial tales will sufficiently answer doubts idly raised as to the question of authorship.
book details : Download 14.3  MB pdf ebook