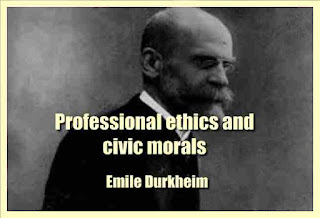 As earlier translators of Durkheim have found, rendering the text in English requires interpretative treatment. Durkheim is often inclined to anthropomorphism, which is carried by the genders of French substantives. In English, fidelity to such liveliness would fail in its purpose and I have given such passages a more sober turn. Further, these Sorbonne lectures exist in the original only as Durkheim's personal Notes or working transcription of those Notes.
The English version attempts to preserve the tone of the spoken word. And the repetitions of one or two passages have been left as found in the University of Istanbul publication.
Where it has been possible to trace Durkheim's references (clearly for his own use in lecturing to his students) to volumes on his own library shelves, I have completed his mere indications to serve the English- speaking student. Finally, philosophic terms have been rendered as consistently as possible, after consultation with specialists in the various subjects discussed by the Author. In regard to Professor Georges Davy's Introduction, there has been no escape for the translator in those abstruse excursions onto the high plateau of philosophic speculation. Here, fidelity has stood in the way of "plain " English
From H.N Kubali introduction:
This work, brought out by the Faculty of Law in the University of Istanbul, is a collection of some hitherto unpublished lectures of Emile Durkheim. In 1934, in Paris, I had set about the writing of a thesis for a doctorate in law on "The Concept of the State held by the Pioneers in the French School of Sociology". It then seemed to me that before all else I must make a study of the precise ideas and thought of Durkheim, as the founder of this school, on the problem of the State. As a sociologist, Durkheim had made no special study of this problem and was satisfied in his published works merely to raise certain questions relative to it.
On that account, I came to the conclusion that relevant and detailed exposition might perhaps be found in his unpublished work if any such existed.
To this end, I approached the well-known ethnographer Marcel Mauss, the nephew of Durkheim. He received me most cordially and spoke of his great feeling for Turkey, which he had visited in 1908, He then went on to show me a number of manuscripts with the title "The Nature of Morals and of Rights". These, he said, were a course of lectures given by Durkheim between the years 1890 and 1900 at Bordeaux and repeated at the Sorbonne, first in 1904, and then in 191 2, and revived in lectures some years before his death. Mauss had no hesitation in entrusting them to me, a fact which I recall with pleasure, and he handed over to me at my request a typescript copy of part of the manuscripts likely to be of especial interest to me. I take this opportunity of paying tribute to the memory of the late scholar:
I owe him a debt for his invaluable help. Mauss had told me at the time of our talk that he intended to publish these manuscripts in Les Annales Sociologiques, he being a member of the editorial committee. But he only published the first part of them, made up of the three lectures on IX Preface Professional Ethics, and this was in 1937, in the Revue de Meta- physique et de Morale. He did this, as he writes in his introductory notes, to comply with the instructions given a few months before his death in 191 7 by Durkheim, who intended some of his manuscripts for Xavier Leon, the founder of the Revue de Metaphysique et de Morale, in preference to others, as a mark of his friendship. In doing this, Mauss announced that he would publish later with these three lectures on Civic Morals which followed them..
the book details : Download 10.3 MB