A dictionary of slang and colloquial English 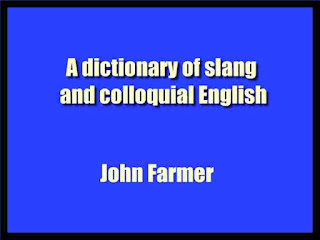 This book is a good slang dictionary for English Language and it was published in 1912.
The author says that this book is "abridged from the seven-volume work, entitled: Slang and its analogues" the book contains 533 pages.
Example:
Ambassador. A trick to duck some ignorant fellow, or landsman, frequently played on board ship in the warm latitudes. It is thus managed: a large tub is filled with water, and two stools are placed on each side of it. Over the whole is thrown a tarpaulin, or old sail, which is kept tight by two persons seated on the stools, who are to represent the king and queen of a foreign country. The person intended to be ducked plays the ambassador, and after repeating a ridiculous speech dictated to him, is led in great form up to the throne, and seated between the king and queen, who rise suddenly as soon as he is seated.
book details : Download 40 MB- PDF ebook