The life of David Hume 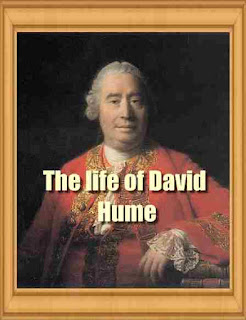 However brief the account which a man of commanding genius or talent may be disposed to give of himself, it can scarcely fail of possessing a portion of the characteristic handling which forms the principal charm of Autobiography.
The well-known sketch by the celebrated David Hume, entitled " My own Life," is an instance of this truth; for although it exhibits no pouring out of the mind in the egotistical style of unreserve, which is not without its attraction from men of a fervid and imaginative character, it is singularly indicative of the philosophic bearing and calm temperament of the distinguished author.
It also supplies a genuine outline of his literary experience; and nothing can be more interesting than authenticated facts, attendant upon the early efforts of writers of celebrity, or more instructive than a comparison of their expectations and disappointments in the first stages of their progress, with the settled estimation and judgment of well-informed society, when they have attained the goal.
Thus, in the following short narrative, we learn that no author met with more neglect than Hume in the first instance, or in due time attracted more wide and varied attention. We also acquire the only written defence of his greatest work, his " History of England," and what is best of all, his observations upon, and summary of his own character.
All this would be attractive from a writer of far inferior pretensions to Mr Hume, but what ought to go farther than all the rest, simple and contracted as this account is, it may be safely asserted that, had it never been written, the world would have been much less informed than it is, in regard to some very distinguishing points in the mental and moral composition of one of the leading philosophers and historians of modern times. my own life is difficult for a man to speak long of himself without vanity, therefore I shall be short. It may be thought an instance of vanity that I pretend at all to write my life; but this Narrative shall contain little more than the history of my writings, as indeed almost all my life has been spent in literary pursuits and occupations.
The first success of most of my writings was not such as to be an object of vanity. I was born the twenty-sixth of April, 171 1, old style, at Edinburgh. I was of a good family, both my father and mother. My father s family is a branch of the Earl of Home s or Hume s, and my ancestors had been proprietors of the estate which my brother possesses for several generations. My mother was the daughter of Sir David Falconer, president of the college of justice: the title of lord Halkerton came by succession to her brother.
My family, however, was not rich; and, being myself a younger brother, my patrimony, according to the mode of my country, was of course very slender. My father, who passed for a man of parts, died when I was an infant, leaving me with an elder brother and sister, under the care of our mother, a woman of singular merit: who, though young and handsome, devoted herself entirely to the rearing and educating of her children. I passed through the ordinary course of education with success and was seized very early with a passion for literature, which had been the ruling passion of my life, and the great source of my enjoyments.
book details : Download 7.6 MB