The catechism of positive religion 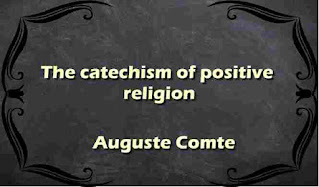 Excerpt from the preface:
In the name of the Past and of the Future, the servants of Humanity — both its philosophical and practical servants — come forward to claim as their due to the general direction of this world.
Their object is, to constitute at length a real Providence, in all departments — moral, intellectual, and material. Consequently, they exclude, once for all, from political supremacy, all the different servants of God — Catholic, Protestant, or Deist — as being at once behindhand and a cause of the disturbance." With t^ this uncompromising announcement, on Sunday, October 19th, 1851, in the Palais Cardinal, after a summary of five hours, I ended my third course of Philosophical Lectures on the General History of Humanity.
Since that memorable conclusion, the second volume of my System of Positive Politics has lately given direct proof how entirely a social destination, such as that above indicated, is the appropriate destination of Positive
Philosophy; for it has shown itself able to suggest the most systematic theory of moral and social order.
We come forward then, avowedly, to deliver the Western world from an anarchical democracy, and from a retrograde aristocracy. We come forward to constitute, as far as practicable, a real sociocracy ; one which shall be able to combine wisely, in furtherance of the common regeneration, all the powers of man, each, of course, brought to bear according to its own nature. In fact we, Sociocrats, are as little democratical as we are aristocratical. In our eyes, these two opposite parties — the respectable portion of time, that is — represent, though on no theory, on the one hand, Solidarity, on the other. Continuity. These two ideas have hitherto been unfortunately antagonistic.
Positivism removes this antagonism, and replaces it by the subordination of the one to the other, by showing Solidarity to be subordinate to Continuity. So we adopt both of these tendencies, in themselves, singly, incomplete and incoherent; and we rise above them both equally. Yet at the present time, we by no means condemn equally the two parties which represent them. During the whole of my philosophical and social career, a period of thirty years, I have ever felt a profound contempt for that which, under our different governments, bore the name of the Opposition; I have felt a secret affinity for all constructive statesmen, of whatever order.
Even those who would build with materials evidently worn-out — even them I never hesitated to refer to the pure destructive, in a century in which a general reconstruction is everywhere the chief want. Our official conservatives are behindhand, it is true. And yet, the mere revolutionist seems to me still more alien to the true spirit of the time; for he continues blindly, in the middle of the nineteenth century, the negative line of action which could only suit the eighteenth. And he does not redeem the stagnation caused hj his error by the generous aspirations after a universal renovation, which was the characteristic of his predecessors.
Hence it is that, although the popular sympathy is instinctive with the revolutionary party, political power constantly passes into the hands of its opponents. For they, at least, recognise the fact, that the metaphysical doctrines are powerless to organize; and recognising this, they seek elsewhere for principles of reconstruction. With the majority of them, their retrograde attitude is, at the bottom, only provisionally adopted as the least of two evils.
They adapt it to meet the anarchy which threatens them, not because they have really any theological convictions. All our statesmen seem for the moment to belong to this school. Yet we may be confident that all they derive from it is, the formulas that they find indispensable for the coordination of their empirical views. They wait for the more real and more stable connexion to spring from a new doctrine of universal applicability.
book details : Download The catechism of positive religion - PDF ebook - 17.3 MB