The Caliphate, its rise, decline, and fall; from original sources 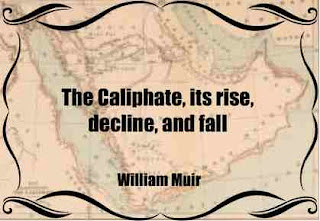 In the present edition, the system of transliteration which has been followed is that of the Royal Asiatic Society, with some modification, which has been adopted in the new Edition of Sir William Muir's Life of Mohammad. A number of minute errors have been corrected, and it is hoped that few have escaped detection.
The closer study of The Caliphate as well as of the Life leaves one with a strong impression of the Author's extreme accuracy- in reproducing the statements of his authorities, as well as of the soundness of his judgment in weighing the evidence in support of two or more divergent accounts.
The Caliphate is based, as far as the Eastern side of the history goes, upon the Annals of Ibn al-Athir, who lived and wrote at Mosul in the early part of the thirteenth century A.D. Sir William Muir read the work through and added a summary translation on the margin of his copy.
Ibn al-Athlr's work is an epitome and continuation of that of the much older historian Tabari {d. 923 A.D.), of which the publication has only been completed in recent years. The value of Tabari's work, again, lies in the fact that it consists almost wholly of citations from much older sources, some of which are nearly contemporary with the events recorded. All of these lived under the 'Abbasid dynasty, yet this fact does not appear to have prejudiced their results so much as one might expect.
The Umayyads are not, upon the whole, painted in much blacker colours than the 'Abbasids, nor are the defects of the latter suppressed.
The worst feature of all, from our point of view, their inhuman cruelty and disregard of life, is common to both. It is generally upon theological grounds that the Caliphs are acquitted or condemned, and the pictures of them which have come down to us are free from caricature and apparently true and fair. Arabic history tends to be almost entirely anecdotal in character, and this no doubt helps one to picture to oneself the figures on the screen and the times in which they moved.
It is necessary, however, also to take account of the forces which shaped and governed the events. Sir William Muir has given full weight to one of the most powerful of these, the perennial jealousy of the northern and the southern Arabian tribes; but this is done in much more detail in Wellhausen's Das arabisclic RcicJi und sein Stun:} and many of his observations have been incorporated in the present edition. Chapter LVIII. on the rival fortunes of the clans in Khorasan is drawn entirely from this work. Persons and events thus become connected together in the way of cause and effect, and the reader runs less risk of not seeing the wood for the trees.
The history of the Arab conquest of Egypt has yet to be written. A. J. Butler's monograph on that subject was published before the relative papyri were available. In the present edition the Arabic papyri from the Collection of Archduke Rainer, edited by J. Karabacek, have been utilised, as well as the Greek papyri in the British Museum edited by H. I. Bell, From the latter the account of the administration at the end of Chapter XXII. has been drawn.
The most important papyri bearing on the conquest itself have, however, it seems, yet to be published. The narrative of the conquest of Syria in Chapters XIII. and XVI I. is a condensed translation of Meinoire Sur la Conquete de la Syrie by the late M. J. de Goeje, who was the leading Arabist of his day. Lastly, the names of the leading schoolmen and men of letters have been mentioned in their proper place, as the influence of these has been after all more important and more enduring than that of the Caliphs.
At the same time, it must be remembered that this is a history of the Caliphate and that in its later stages it was almost out of touch with the great literary and scientific movements of the time.
book details : Download 32 MB- PDF ebook