The origins of the Islamic state 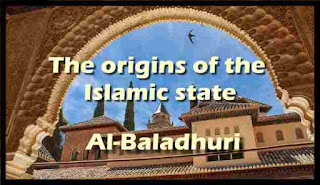 being a translation from Arabic, accompanied with annotations, geographic and historic notes of the Kitâb fitûh al-buldân of al-Imâm Abu-l Abbâs Ahmad ibn-Jâbir al-Balâdhuri.
Pt1. Arabia. Syria. Mesopotamia. Armenia. Northern Africa. Andalusia. Islands of the sea. Nubia. Al-Irâk and Persia. Media. -- Pt. 2. Northern Media. Adharbaljân. Mosul. Jurjân and Tabaristân and their districts. The districts of the Tigris. Khuzistân. Fars and Kirmân. Sijistân and Kâbul. Khurâsân. Conquest of as-Sind. Appendices
Excerpt:
Interest in the Nearer East has increased our desire ta know as accurately as is possible the beginnings of the faith and of the various states that have played so important a part in its history. The Arabs themselves have had, from the earliest times, a keen sense for historical tradition and an equally keen desire to preserve that tradition in writing.
There is, perhaps, no people of earlier times that has left us so large an amount of documentary evidence as to its be- ginnings as they have. The evidence, of course, needs sift- ing and sorting according to the canons of criticism we have learned to employ in all such cases. But, this work cannot be done by Oriental scholars alone, whose time is often taken up largely with the philological and literary examination of the texts that have come down to us.
It is, therefore, eminently a part of their duty to render these texts accessible to students of history who are not masters of the Arabic language. Dr Hitti has undertaken this task in connection with the record of one of the earliest Arab historians whose work has been preserved. Since its publication in 1866 by Professor de Goeje, al-Baladhuri's " Futuh al-Buldan" has been recognized as one of our chief authorities for the period during which the Arab state was in process of formation.
This task of translating has not been a simple one: the proof is that the attempt has not been made before this. The style of al-Baladhuri is often cryptic and unintelligible. This is perhaps due to the fact that the work, as it has reached us, is a shortened edition of a much larger one which, though existent up to the seventeenth century, has not been found in any of the collections of manuscripts to which we have access.
In its present form, the work mentions often men and matters that probably were treated of in the longer recension, but of which now we know nothing. Dr Hitti's translation is, therefore, in a certain sense also, a commentary and an exposition. As such, I trust that it will be found useful to Orientalists as well as to students of history. His fine sense of the niceties of Arabic expression has often enabled him to get through a thicket that is impenetrable to us Westerners.
book details : Download The origins of the Islamic state - 21.3 MB