The art of thought 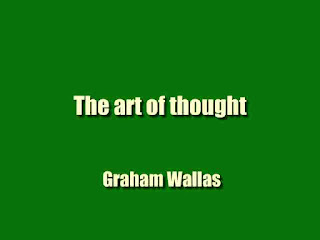 During the last twenty years, I have from time to time attempted to explore the problem of how far the know¬ ledge accumulated by modern psychology can be made useful for the improvement of the thought-processes of a working thinker. I have published chapters dealing with various sections of that problem in my Human Nature in Politics (1908), Chapters II to V, The Great Society (1914), Chapters III, X and XI, and Our Social Heritage (1921), Chapters II, III and IV.
This book is intended to be, not a summing up of my earlier attempts, but an extension of my inquiry, particularly as regards the less conscious factors in thought. In particular, I have not here dealing with the problem of organized co-operation in thought, which I discussed in Chapter XI of The Great Society.
My footnotes and quotations will indicate the psychological books which have helped me. But my main material has been derived from my experience, during more than forty years, as a teacher and administrator, and from the accounts of their thought-processes given by poets and others who were not professed psychologists, by some of my students, and by friends in England and America. If my book helps a few young thinkers in the practice of their art or induces some other psychological inquirer to explore the problem with greater success than my own, I shall be more than content.
Men have recently increased their power over Nature, without increasing the control of that power by thought. We can make war more efficiently, but cannot prevent war; we can explore the world, but cannot contrive an interracial world- policy; and the same want of intellectual control exists, within each nation, in politics, philosophy and art.
We require, therefore, both more effective thinking on particular problems, and improved art of thought, in which scientific explanation may overtake and guide empirical rules. But in thought, as in cookery, science lags behind empiricism, and the study of modern psychological text¬ books may even hinder effective think¬ ing.
This fact is largely due to the use by psychologists of the ‘mechanist’ conception of instinct as ‘power,’ and of reason as ‘machine.’ Some of the best modern physiologists and psychologists are, however, opposed to that conception, and substitute for it the ‘hormist’ conception of the human organism as an imperfectly integrated combination of living elements, each of which retains some initiative of its own, while co-operating with the rest in securing the good of the whole organism. The aim of the art of thought is to improve the coordination of these elements in the process of thought.
the book details : Download The art of thought - 71.8 MB