The most important and interesting incidents of their history, their personal manners and habits, and anecdotes op their intercourse among the high and the low, with their most remarkable apophthegms. Proverbs, and pithy replies to difficult and curious questions, alphabetically arranged. 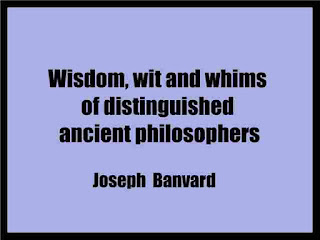 This book contains excerpts from ancient philosophers with biographical notes for the general readers.
In preparing the present volume, the compiler availed himself of the works of various authors, the principal of which was, " The History of Philosophy from the Earliest Periods, drawn up from Brucker's Historia Critica Phiosophise, by William Enfield, LL.D;
The Lives and Opinions of Eminent Philosophers, by Diogenes Laertius, translated by C. D. Yonge, B. A.;" and " Stanley's History of Philosophy and Lives of the Philosophers," neither of which has ever been published in this country.
No attempt is made to develop the various systems of Philosophy which at different ages have prevailed, but simply to present the most interesting and important events in the history of the philosophers themselves.
The work contains a great amount of curious and instructive information, which, hitherto, has not been accessible to the general reader.
Most of those whose memoirs are here given were authors, and many of them produced numerous works. There were also many philosophers of the same names; but in the following pages, reference has been made only to the most distinguished.