Humanitism : the scientific solution of the social problem 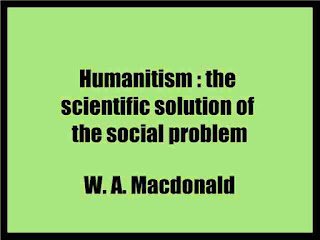 In presenting this work to the public, no apology, I think, is necessary, for my conclusions do not interfere with the writings of other authorities on social questions. The material has been gathered from the ablest scientific authorities, but its method of application to the solution of the social problem is quite original.
The constantly diverging trains of modern thought necessitate some new and enlarged method of restoring unity and harmony, and I am baffled in all my efforts to find how this end can be attained through the theories of any one or more of the existing schools.
In an inquiry that claims to be scientific, every sphere of human activity must be equitably adjusted, and the comprehensive nature of the undertaking may thus be easily realised. Had I framed together with the mass of material which I have collected, the dimensions of this volume would have been multiplied at least threefold, which would have placed it beyond the reach of many whom it is intended specially to benefit.
Accordingly, I have written the work in language as popular as can be made consistent with an inquiry of this kind, and have sacrificed much for the sake of brevity. This course, however, does not detract from the value of the work as a message to scientists; for, although the matter may be well-known. to them, the inquiry points out the immense and largely untrodden field of scientific investigation connected with social problems.
The necessity for a scientific standard of morality, wherein all our actions may be reduced to numbers which have a definite relation to our moral destiny, has long been felt, and to this feature of my inquiry, I desire to draw special attention.
There is a social problem to be solved -may be pronounced an unwarrantable assumption. Some maintain that what is, is right, and man is therefore just what he ought to be; that, barring the conduct of a few malcontents who should be peremptorily suppressed, there is nothing to dis- quiet social order and harmony. These convictions, however, are not now shared by a majority of fair-minded people.
No end can be attained in the discussion of this question without first of all fixing man's moral destiny. This, again, maybe viewed from two standpoints:
(1) the destiny fixed by the perpetuity of the forces through which we are now controlled, and
(2) the destiny fixed by any proposed changes in these forces. It does not alter the proposition to say that we, as the architects of our own fortunes, are the controlling agency; for, under all circumstances, every action or inaction begets one or more logical sequences.
In this inquiry it is my purpose to show that the controlling forces, or any modifications thereof which have been proposed, lead to the extinction of our race; and if this is our moral destiny, there is no social problem to be solved. I should, perhaps, have said the extinction of civilisation, instead of that of our race, for the extinction of all humanity is conditioned by the universal spread of civilisation, not of existing forms only, but also of all civilisations that may arise under the sway of any one or more of the existing schools of sociology.
There being, therefore, no social problem to be solved in the abstract category, the only recourse is to shift the forces into the category wherein the perpetuity of civilised peoples is involved. I shall show that civilisations are built upon abstract theories, which have removed them from the natural laws of their development, and that a scientific basis for all our actions and activities must be obtained.
This end can only be reached through unity and harmony of thought an orderly restoration of the disorder and discord engendered by the ever-diverging schools of social metaphysics. In speaking of the method of solving the social problem as being scientific, and of the founding of morality on a scientific basis, it is necessary to understand precisely in what sense the word science is employed, what is meant by the scientific method of inquiry, and how far science can be utilised in the solution of social problems.
book details : Download 13.4 MB - PDF