The Psychology of Philosophers 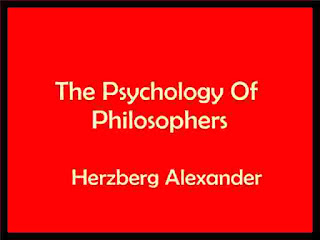 We may ask how a person comes to develop a particular neurosis with the curious symptoms which often accompany neuroses.
We may also ask what kind of person develops neuroses and what kind does not: psycho-analysis is concerned with finding the answer to both questions. In the same way, we may inquire how a person comes to develop his particular theory of life and what sort of person he must be to develop one, for it does not happen to everybody. After many others had made the attempt, Miller-Freienfels answered the first question categorically and systematically by the statement that a person’s outlook upon life is determined by his intellectual and emotional structure; the second question has not yet formed the subject of such general and intensive study.
The purpose of this book is to supply the deficiency and to answer the question of why anyone constructs an outlook on life for himself or, to be more precise, becomes a philosopher. I have enumerated the factors which must be present in a man’s mind in order that he may become a thinker, and above all a great thinker, for we are here thinking of a theory of life mainly in the philosophical sense and not in the wider sense in which the term is used by Miller-Freienfels, who makes it include both artistic outlook and religious creed.
Still, having regard to the close connexion of the three fields of study, the problem of the artist and that of the man of religion must also be touched upon. I will lay my cards on the table at once with an answer to Gretchen’s question: — “ How stands it with religion in thy mind? ”
The “ religion ” with which we are here concerned is psycho-analysis. My attitude is one neither of disbelief nor of adoration but is selective and critical. Apart from certain fundamental points of agreement which lie in the non-phenomenological, analytical, treatment of the psychology of the philosophers, in the demonstration of the requisite psychical factors and in the attribution of high value to the impulses, I have also taken over directly certain psycho-analytical teachings, in particular, those of sublimation and of the development of neuroses through the insufficient satisfaction of impulses — though with not inconsiderable changes.
On the other hand, I have not accepted the theories which regard sex curiosity as underlying the general desire for knowledge, the repression of sex impulse as the origin of philosophical thought, and sexual interests as of primary importance over the other interests of life and thought. These and many other similar theories which also seemed to me untenable have been replaced by other and, I venture to hope, better ones.
What manner of man may become a philosopher is a question that engaged Plato’s attention. His answer was that he must be one to whom “ nature shall have given a retentive memory and made him quick at learning, lofty-minded and graceful, the friend and brother of truth, justice, fortitude and temperance.
To these qualities, however, something must be added to prevent him from following the allurements of riches and fame or to hold him back from politics in their present state — ill- health or an inner warning voice. But outward restraints such as condemnation to exile or the narrow life of petty States, upon which a large-minded man looks down with contempt, may take the place of these inner factors.
Schopenhauer believed that the common factor of a philosophic and artistic genius is the predominance of intellect over will: whilst the ordinary man consists, so to speak, of two parts of will to one of intellect, the proportions are reversed in the genius, who possesses far more intellect than is necessary to the satisfaction of his will and whose intellect succeeds at times in shaking itself free from the harness of practical interests and contemplating the world, in Schopenhauer’s words, as a pure eye of the spirit and a purely perceptive entity. Such contemplation he regarded as essential to true philosophic or artistic accomplishment.
Download