The emigrant's notebook and guide 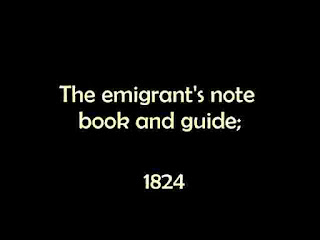 Sir, In addressing one who has devoted himself to his country, — and who ranks so high in service, as conspicuous for its candour as for its gallantry, — it would be an insult to offer the language of flattery and adulation: it would likewise ill accord with my own feelings.
Even were I here to allude to particular actions, and attempt to hold them up to the admiration of the world — from my total inability to do justice to the IV task — I should incur the charge of vanity and presumption. Permit me^ therefore,
Sir, in the plain and simple language of truth, to assure you of my gratitude, and more particularly, for being allowed to dedicate to you this humble effort of my pen. With every sentiment of respect, I have the Honour to be, Sir, Your most obedient, humble Servant, J. C.  Morgan.
At the commencement of the late war with the United States of America, the first and second battalions of Royal Marines, under the command of lieutenant-colonels Sir Rich- ard Williams, and Sir James Malcolm, Knights Commanders of the Bath, were recalled from the north of Spain, and after being properly recruited and equipped, were dispatched for the coast of America, in the early part of the year
The Islands of Bermuda was the first point of rendezvous; and here we arrived on the 23d of May, after a passage of six weeks, in His Majesty's ships Diadem, Diomede, Fox, Nemises, Success and Romulus, armed en flute, and Mariner armed transport.
The events which occurred in the voyage, were such as occur to other people, similarly situated, and therefore need no particular description. I shall consequently only observe, that my companions were just such as a man would wish to be embarked with, for a long voyage, and to those friends — " Well pleased I turned Regardless of the storms which raged without." A brief sketch of the Bermudas may, however, amuse the fire-side traveller, who may peruse these pages.
Download