The adventures of Tom Stapleton 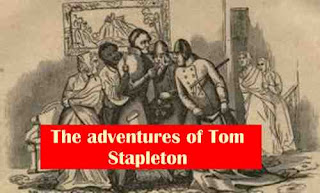 Excerpt:
This was more than I had counted on, tor I began to fear who killed the fellow and that the boot-jacK with my name on it, would be taken as sufficient circumstantial evidence to consign me over to the polite attention of Jack Ketch; but while I was yet conjuring up anything but comfortable visions of the result, my mind was relieved by the arrival of a couple of watchmen, who lifted the man on his feet, and led him away; as also the female, who had implored them to convey her to some place of shelter.
I need scarcely remark that after their departure l regained possession of my boot-just with the most praiseworthy dispatch: but m defence of my gallantry, it is but fair to state, that I was only withheld from running to the assistance of the woman, by a villainous idea which suggested itself to my mind, of the trial and conviction of one Tom Stapleton for assault and battery, with intent to kill— if not, indeed, for actual manslaughter. Moreover, I felt persuaded that the poor wretch would be comforted m the watch-house. Alas! I had yet to learn that the comfort which such poor wretches receive in watch-houses, is the comfort that got cold.
book details : Download The adventures of Tom Stapleton - PDF - 42 MB