Remarkable rogues; the careers of some notable criminals of Europe and America. 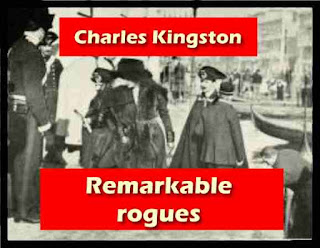 That interest in crime and the criminal is universal no one will deny. In a cruder age, it was the custom to organize parties to witness the public execution of notable scoundrels — Monckton Milnes (Lord Houghton) took Thackeray and, 1 believe, Dickens, to see Courvoisier's — but nowadays we are more decorous, although on occasion several thousand persons can assemble outside the prison and stare at a blank wall during a private hanging inside. Most of us, however, are content to behold crime through the eyes of our favourite journal and it is impossible to complain that the press does not cater fully for us in this respect.
That crime retains its fascination for high and low is proved almost every time there is a sensational trial at the Central Criminal Court, for the attendance invariably includes distinguished politicians, authors, artists and representatives of that nebulous class termed " Society."
It is, however, no longer possible for a special box to be erected at the Old Bailey to enable members of the Royal Family to watch a man on trial for his life, and it is now bad form for a " popular judge " to surround himself with princes and peers and audibly keep them au fait with the evidence.
These things have passed away and we have " headlines " and contents-bills in their place. We are, in fact, more respectable if less robust, but sin and sinners will intrigue us to the end of Time. James Greenacres was the subject of more than one pamphlet biography, but I have preferred to go to the copious reports of his trial for my material, and I consulted similar sources whenever possible before writing the chapters dealing with Marie Tarnowska, Mrs Leroy Chadwick, Jeanne Daniloff, three of my German criminals and several others. Greenacre's trial and execution were conducted on typical early nineteenth-century lines, and that loathsome scoundrel was nearly elevated to the pinnacle of a hero by indiscriminate publicity.
The competition to be present in Court when he was in the dock was so keen that a pound ahead was charged for admission to the gallery on each day and even at chat price the queue was always greater than the accommodation. After his conviction he was visited in prison by scores of " noblemen and gentlemen," and while in a contemporary account of the execution — which I quote — the reporter omits the names of those eminent persons who attended it, it is significant that the number of private carriages, according to another journalist, should have exceeded fifty. I obtained from an American detective who knew Adam Worth many of the details of that rogue's doings, and it is to an American newspaper of the late sixties that I am indebted for particulars of Belle Star's career. Marie Tarnowska told her own story to Madame A. Vivanti Chartres, who sympathetically transferred the countess's apologia to paper and published it.
As a human document, it is very interesting but it is not convincing, and the very full report of her trial at Venice published in the press of this country is the only reliable guide to an understanding of the case. M. Canler, the famous French detective, first related in narrative form the incidents which lead to the three arrests of the murderers of Madame Houet, and I consulted the French and English papers for the history of Pierre Voirbo's crime. " Madame Rachel " was tried three times and there were several special reports at the disposal of the author, but she does not seem to have attracted much notice since her death and an account of her life will be new to most of my readers.