Other people's money, and how the bankers use it 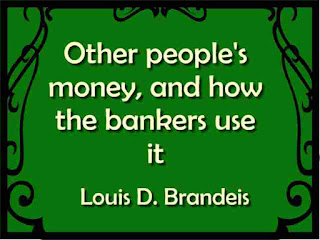 While Louis D. Brandeis's series of articles on the money trust was running in Harper's Weekly many inquiries came about publication in more accessible permanent form. Even without such urgency through the mail, however, it would have been clear that these articles inevitably constituted a book, since they embodied an analysis and a narrative by that mind which, on the great industrial movements of our era, is the most expert in the United States. The inquiries meant that the attentive public recognized that here was a contribution to history.
Here was the clearest and most profound treatment ever published on that part of our business development which, as President Wilson and other wise men have said, has come to constitute the greatest of our problems. The story of our time is the story of the industry.
No scholar of the future will be able to describe our era with authority unless he comprehends that expansion and concentration followed the harnessing of steam and electricity, the great uses of the change, and the great excesses. No historian of the future, in my opinion, will find among our contemporary documents so masterful an analysis of why concentration went astray. I am but one among many who look upon
Mr Brandeis as having, in the field of economics, the most inventive and sound mind of our time. While his articles were running in Harper's Weekly I had ample opportunity to know how widespread was the belief among intelligent men that this brilliant diagnosis of our money trust was the most important contribution to current thought in many years. "Great" is one of the words that I do not use loosely, and I look upon Mr Brandeis as a great man.
The composition of his intellect, one of the most important elements in his comprehension of figures. As one of the leading financiers of the country said to me, "Mr Brandeis's greatness as a lawyer is part of his greatness as a mathematician." My views on this subject are sufficiently indicated in the following editorial in Harper's Weekly.
Contents:
Our financial oligarchy.--How the combiners combine.--Interlocking directorates.--Serve one master only!--What publicity can do.--Where the banker is superfluous.--Big men and little business.--A curse of bigness.--The failure of banker management.--The inefficiency of the oligarchs t
book details : Download Other people's money, and how the bankers use it -7.6 MB.