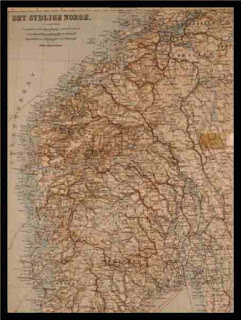 Scandinavia, the largest peninsula in Europe, embracing the kingdom of Norway on the W. and N. sides, Sweden on the E. and S., and part of Russia to the N.E., is about 296,500 Engl. sq. M. in area. It extends from S.S.W. to N.N.E. between 57° 57' and 71° 11' N. latitude, being upwards of 1100 Engl. M. in length. Between the Gulf of Bothnia and the N.W. coast, its breadth is about 260 Engl. M., and towards the S. it gradually increases, though at the point where the Trondhjem P'jord forms a deep indentation it narrows to 160 M. Farther to the S., in latitude GO" (that of Christiania and Upsala), the width increases to 435 M., beyond which Norway forms a rounded peninsula ending in Cape Lindes- n.-es (58° 59'"), while the S. part of Sweden forms another peninsula to the S.E. of the Christiania Fjord, gradually narrowing, and terminating in the promontory of Falsterbo (5.5° 20' j near Co- Copenhagen.
The entire coastline of the peninsula, disregarding its innumerable indentations, measures 2060 M. in length, the part between Cape LindesniBS and Vadse alone measuring 1250 M.
The peninsula contains no distinctly connected mountain ranges like those in most other countries but mainly consists in its W, part of a vast elevated plateau, descending abruptly to the western fjords and sloping gradually down to the plains of Sweden and the Gulf of Bothnia on the E. side. Roughly speaking, a line is drawn parallel with the W. coast, about 50-60 Engl. M. inland, marks the boundary of the mountain plateau, the W. margin of which is deeply indented with innumerable bays and creeks, and fringed M'ith a belt of countless rocky islands.
The latter is known as Skjar (Sw. skar), and the island belt is the Skjargaard (Skarsgard). To different parts of the mountain-plateau are applied the names of Fjeld ('fell'), Heidar ('heights'), and 17(Mer ('widths', barren expanses), and in the N. part of the peninsula Kjeler ('mountain ranges'), and from it rise at intervals rounded and occasionally pointed peaks of considerable height. The Mountains are composed almost entirely of primary rocks, presenting nearly the same form as when originally solidified, and are rarely overlaid with more recent formations, so that for the geologist they possess the charm of the most hoar antiquity.
These primary rocks consist of granite, gneiss, mica, hornblende, slate, quartzite, clay-slate, limestone, and dolomite, disposed of in strata, corresponding with which are occasional well-defined layers of later slate-formations and particularly of limestone. At places, notably in the Romsdal, or Valley of the Rauma, the gneiss, the oldest of these rocks, towers in most imposing pinnacles, 5000- 6000 ft. in height, unencumbered by any later formations. That valley extends from the Moldefjord to the S.E., intersecting the pure gneiss rock, which rises on each side in almost perpendicular cliffs, 2000-3000 ft. in height, and is afterwards prolonged by the Gudbrandsdal descending to Lake Mjasen.
In the grandeur of rock-scenery, and in the purity of its formation, this magnificent valley is hardly inferior to the far-famed Yosemite Valley of the Sierra Nevada in California. About the year 1840 rocks of the Silurian Formation were discovered by geologists near the Christiania Fjord, and other deposits of that period have since been found in Skane, Vester-Got- land, the island of Gotland, Herjeadalen, und Jemtland in Swe- den, and also on the banks of Lake Mjesen and in Trondhjems Stift in Norway, but nowhere of great extent.
The largest Silurian basin in the peninsula is that of the Storsjo in Jemtland, a lake of 2570 Engl. sq. M. in area. One of the most instructive sections of the country is formed by the route from Sundsvall in Sweden to Ostersund on the Storsjo and Trondhjem in Norway.
The primitive crystalline rocks of Jemtland are first replaced by limestone, extending to the E. bank of the lake, where the Silurian formations begin. These stretch westwards to the great mountain backbone of Sweden and Norway. On this route rises Areskutan, the highest mountain in Sweden (p. 384), part of the base of which on the E. and W. sides belongs to the Silurian formation, while the primary rocks, consisting of quartzite, hornblende, mica-slate, and gneiss, protrude through it all the way to the summit. From this vantage ground, we obtain an excellent idea of the character of the Scandinavian mountains.