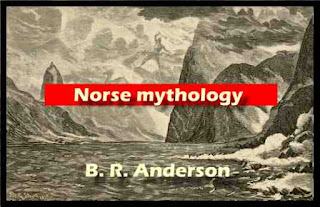 The religion of our forefathers, containing all the myths of the Eddas, Systematized and interpreted with an introduction, vocabulary and index

We come, this time, encouraged by all your kind words, with higher aspirations, and perhaps, too, with less timidity and modesty. We come to ask your opinion of Norse mythology. We come to ask whether Norse mythology is not equally as worthy of your attention as the Greek. Nay, we come to ask whether you will not give the Norse the preference. We propose to call your attention earnestly, in this volume, to the merits of our common Gothic or Teutonic inheritance, and to chat a few hours with you about the imaginative, poetic and prophetic period of our Gothic history.
We are well aware that we are here giving you a book full of imperfections so far as style, originality, arrangement and external adornment of the subject is concerned, and we shall not take it much to heart, even if we are severely criticised in these respects; we shall rather take it as an earnest admonition to study and improve in language and composition for the future. But, if the spirit of the book, that is, the cause which we have undertaken to plead therein, — if that be frowned down, or rejected, or laughed at, we shall be the recipient of a most bitter disappointment, and yet we shall not wholly despair.
The time must come when our common Gothic inheritance will be loved and respected. There will come, men — ay, there are already men in our midst who will advocate and defend its rights on American soil with sharper steel than ours. And, though we may find few roses and many thorns on our pathway, we shall not suffer our ardour in our chosen field of labour to be diminished. We are determined not to be discouraged.
What we claim for this work is, that it is the first complete and systematic presentation of the Norse mythology in the English language; and this we think is a sufficient reason for our asking a humble place upon your book-shelves. And, while we make this claim, we fully appreciate the value of the many excellent treatises and translations that have appeared on this subject in England.
We do not undervalue the labours of Dasent, Thorpe, Pigott, Caryle, etc., but none of these gives a comprehensive account of all the deities and the myths in full. There is, indeed, no work outside of Scandinavia that covers the whole ground. So far as America is concerned, the only work on Norse mythology that has hitherto been published in this country is Barclay Pennock's translation of the Norse Professor Rudolph Keyser's Religion of the Northmen.
This is indeed an excellent and scholarly work, and a valuable contribution to knowledge; but, instead of presenting the mythology of the Norsemen, it interprets it; and Professor Keyser is yet one of the most eminent authorities in the exposition of the Asa doctrine.
Pennock's translation of Keyser is a book of three hundred and forty-six pages, and of these only sixteen are devoted to a synopsis of the mythology; and it is, as the reader may judge, nothing but a very brief synopsis.

WHAT IS MYTHOLOGY, AND WHAT IS NORSE MYTHOLOGY?
The myth the oldest form of truth — The Unknown God — Inge- mund the Old — Thorkel Maane — Harald Fairfax — Every cause in nature a divinity — Thor in the thunder-storm — Prominent faculties impersonated — These gods worthy of reverence — Church ceremonies — Different religions — Hints to preachers — The mythology of out ancestors — la its oldest form it is Teutonic — What Dasent says — Thomas Carlyle, 23

WHY CALL THIS MYTHOLOGY NORSE? OUGHT IT NOT RATHER BE CALLED GOTHIC OR TEUTONIC?
Introduction of Christianity — The Catholic priests — The Eddas — Mythology in its Germanic form — Thor not the same in Norway and Denmark — Norse mythology — Max Miiller, - 41