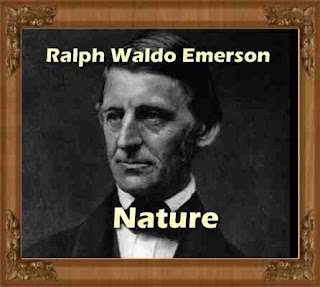 Excerpt:
Our age is retrospective. It builds the sepulchres of the fathers. It writes biographies, histories, and criticism. The foregoing generations beheld God and nature face to face; we, through their eyes. Why should not we also enjoy an original relation to the universe? Why should not we have a poetry and philosophy of insight and not of tradition, and a religion by revelation to us, and not the history of theirs 1 Embosomed for a season in nature, whose floods of life stream around and through us, and invite us by the powers they supply, to action proportioned to nature, why should we grope among the dry bones of the past, or put the living generation into masquerade out of its faded wardrobe? The sun shines today also. There is more wool and flax in the fields.
There are new lands, new men, new thoughts. Let us demand our own works and laws and worship. Undoubtedly we have no questions to ask which are unanswerable. We must trust the perfection of the creation so far, as to believe that whatever curiosity the order of things has awakened in our minds, the order of things can satisfy.
Every man's condition is a solution in hieroglyphic to those inquiries he would put. He acts it as life before he apprehends it as truth. In like manner, nature is already, in its forms and tendencies, describing its own design. Let us interrogate the great apparition, that shines so peacefully around us. Let us inquire, to what end is nature.
All science has one aim, namely, to find a theory of nature. We have theories of races and of functions, but scarcely yet a remote approximation to an idea of creation. We are now so far from the road to truth, that religious teachers dispute and hate each other, and speculative men are esteemed unsound and frivolous. But to a sound judgment, the most abstract truth is the most practical. Whenever a true theory appears, it will be its own evidence.
Its test is, that it will explain all phenomena. Now many are thought not only unexplained but inexplicable; as language, sleep, dreams, beasts, sex. Philosophically considered, the universe is composed of Nature and the Soul. Strictly speaking, therefore, all that is separate from us, all which Philosophy distinguishes as the Not Me, that is, both nature and art, all other men and my own body, must be ranked under this name, Nature.
In enumerating the values of nature and casting up their sum, I shall use the word in both senses; in its common and in its philosophical import. In inquiries, so general as our present one, the inaccuracy is not material; no confusion of thought will occur. Nature, in common sense, refers to essences unchanged by man; space, the air, the river, the leaf.
Art is applied to the mixture of his will with the same things, as in a house, canal, a statue, a picture. But his operations taken together are so insignificant, a little chipping, baking, patching, and washing, that in an impression so grand as that of the world on the human mind, they do not vary the result.
the book details : Download Nature - 3.2 MB - PDF ebook