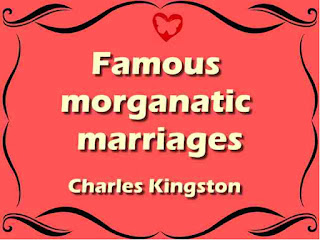 Excerpt:
The Great War has changed everything except human nature, and if the term " morganatic marriage " now seems anachronistic there always will be men and women to rebel against convention and to seek in an experiment a panacea for restlessness and ennui.
Mankind has ever been inconsistent. It has set up kings, pampered their families and pauperised their brains, applauded them when they have contracted " love matches " — going into ecstasies over their " human qualities " because a prince has married a peasant or a princess has condescended to ally herself with a "mere nobleman" — and then has dethroned them for not being divine!
We may live to see the day when an English or American millionaire creates astonishment by permitting his daughter to marry a Windsor or a Romanoff, though in that case there will be many who will not long for old age because they shrink from the horrors of bogus and spurious equality.
A morganatic marriage is generally regarded as a love match, but an examination of the records does not prove them to be more successful than less romantic alliances entered into for reasons of State. There could have been no more captivating story than that of the events which brought about the union between H.R.H. Princess Elizabeth of Austria and Otto von Windischgraetz, and yet the marriage has been a complete failure. If democratic Austria can find time to establish a democratic divorce court its first cause celebre will be Prince Otto von Windischgraetz v. Princess Otto von Windischgraetz and Many Others.
There are charges and counter-charges on both sides, and altogether the affair indicates that the Hapsburgs are as unlucky as they are incompetent. It has been rumoured that King Alexander wishes to marry an American beauty and make her his queen.
He has for precedent Napoleon III who persuaded his volatile subjects to accept a lady of non-royal birth as their empress. It is doubtful, however, if he will succeed, for the over-taxed Greeks may not regard an American queen as the real article, and ultra- democrats like, above all things, to get value for other people's money. Princess Patricia of Connaught has two personalities. In the royal circle, she is a princess of the United Kingdom; outside it, she ranks as the daughter of a duke and is Lady Patricia Ramsay.
The German-made word " morganatic " has only been whispered in connection with her marriage, but as it is most improbable that she ever will come near the succession to the throne it is unnecessary to define it. It may be urged that I have treated too romantically the twenty morganatic marriages I have chosen for this volume, but my excuse is that even a royal romance may have its romantic side.
(Morganatic marriage, sometimes called a left-handed marriage, is a marriage between people of unequal social rank, which in the context of royalty or other inherited title prevents the principal's position or privileges from being passed to the spouse, or any children born of the marriage.)
Wikipedia

I. A Russian Adventuress
II. King Leopold and Caroline Lacroix.
III. The Archduke and the Ballet Girl
IV. Rudolph's Daughter and the Austrian Lieu-tenant
V. The Crown Prince Rudolph's Widow
VI. The Ex-Kaiser's Fourth Son
VII. An Archduke and an Actress.
VIII. The Queen and the Private Soldier
IX. The Ex-Czar's Brother...
X. The Archduke Charles and Elsa Czuber .
XL The Last British Morganatic Marriage.
XII. The Prince and the Cafe Singer
XIII. The Grand Duke and the Girl Revolutionary
XIV. The Prince and the Peasant Maid
XV. An American Princess
XVI. The Grand Duke Paul and Olga Karnovitch
XVII. A Swedish Romance
XVIII. An Archduke's Two Marriages
XIX. The Case of Sophy Chotek
XX. A Romance and a Tragedy
book details : Download Famous morganatic marriages- 9 MB.