The metaphysics of nature 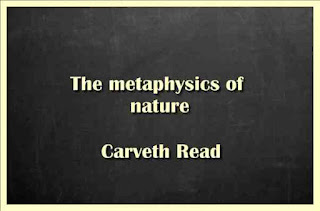 As to the nature and scope of Philosophy, two opinions are current. Some regard it as no more than the organisation of the Sciences: that further content is unattainable has been shown, they say, by the experience of repeated failure and by reflection upon the nature of the case.
According to others, there are prescientific beliefs that still have a necessary place in human life; and, even if no definite predictions can be made outside the circle of the sciences, still the grounds of the sciences themselves must be examined, and their claims to be a comprehensive and sufficient explanation of the course of the world and of human experience must be vindicated.
These opposing doctrines may conveniently be called the Positive and the Critical. To me, it seems that, when reasonably stated, they are not opposed, but that both are necessary and complementary one to another. Positive Philosophy, the attempt to unite the Sciences in one system, to expound their mutual relations and the harmony of their laws, is such a manifest demand of reason, that almost at the beginning of European speculation it was felt by Plato {Bep. B. VII.); at the beginning of modem thought, by Bacon; since Comte, the idea has become popular, and the first problem of the Positive Philosophy, the Classification of the Sciences, is now a common exercise.
The great body of the Positive Philosophy (not merely Comtian) is constituted by those sciences which give an account of the genesis and history of the world, — Astronomy, Geology, Biology, Psychology, Sociology: the Analytic Sciences, treating of the modes of energy or activity which the genetic Sciences imply, are, — Mechanics, Physics, Chemistry, Physiology, Economics, etc.: the Formal Sciences, Logic and Mathematics, investigate the conditions of proving the relations and laws of phenomena in general, so far as proof is possible from accepted premises.
Critical Philosophy, which takes its name from Kant, and which I shall usually call Metaphysics, is the study of the validity and adequacy of knowledge and belief. Positive Philosophy, with its premises, is, therefore, part of the object of Metaphysics; but only a part: for Metaphysics has two branches, the Metaphysics of Nature and Science, and the Metaphysics of Ideals.
The Ideals are expressed in Polity, religions, Art, and Virtue; but these human Ideals and their metaphysical significance are beyond the scope of this volume. The Metaphysics of Nature, as Nature is presented to us in science and experience, is my subject; but since the regions of science are certainly greater than I can explore, I shall deal only with their most general principles, where they come nearest to philosophical interest, are least technical, and have now become an element of general culture; and it is a rule from which I never depart, not to attempt to solve a •priori any problem, that can only be effectually treated by inductive methods.
The criticism of knowledge and beliefs, then; and, of course, some extensions and interpretations of them, in order to give, roundness and coherence to the whole ; in fact, an essay toward the Prima Philosophia. He who makes the Sciences of Nature or Ideals of Humanity the object of criticism, and investigates their validity and value, is not therefore sceptical about them. In some ages it is a fashionable distinction of the Minute Philosopher to doubt of the Ideals; at present, perhaps, to doubt of the Sciences, but it would be very insincere of me to claim merit upon either score.
It is, indeed, foolish not to recognise that Natural Science, so recent a growth, must be immature, or not to admit that much even of what is considered to have been established may be infected with error. It is also obvious that popular morals are little better than barbarous, and philosophic morals are often narrow, timid and compromising; that popular religion is wavering, confused and superstitious, and that philosophical religion usually consists in offering one's personal persuasions as an apology for catholic dogma. But these things cannot hide the equally obvious truth that our daily life depends in every detail upon science, and for its stability and amelioration upon morals and religion.
There is indeed one conception characteristic of our age and sprung from its profound reflections, which may yet paralyse us with self-suspicion and fear. So long has been the process of the world, so long the period of human existence, so recent is the growth of science and moral enlightenment; BO long is to be the future of mankind, so vast perhaps the expansion of civilisation and intelligence: what hope that we can yet have achieved or perfected anything? Must not all our culture appear shallow and vain in the comprehension of the world to come? May not our own descendants be the " superior beings " to " show a Newton as we show an ape "? But to let ourselves be inhibited by such forebodings is the surest way to prevent their realisation.
The city founded on science which Plato and Bacon beheld in prophetic vision, can only be built by the continuous labour of human generations; of which ours is one. As the past is not abolished but re-embodied in ourselves, so shall it fare with us hereafter. And indeed better: for we are hardly rid of the illusion of astonishment or even laughter at the errors of ancient or even recent predecessors; but Time, with equal travail the mother of truth and error, will at last give birth to comprehensive criticism.

Introduction.--book I. Canonic.--book II. Cosmology.--book III. Psychology.--book IV. The categories
Chapter I. — Belief and Knowledge
1. The Scope of Philosophy
2. Belief, Knowledge, and Science
3. Hume on Belief.
4. Society and Belief
5. Initial difficulty of Philosophy
6. Natural Douht, Belief, and reason
Chapter II. — Reality and Truth
1. Beality Empirical, Physical, Transcendent, Subjective
2. The Truth of Perception
3. The Conceptual System and the Physical Method
4. The Truth of Subjective Reality
5. The Subjective Conceptual System
6. The Truth of the Conceptual System.
7. In Metaphysics, Percepts and Concepts imply Judgments
Chapter III. — The Test of Truth;
1. The Greeks
2. Descartes
3. Locke...
4. Cudworth and Spinoza, Intuition
5. Leibniz...
6. Kant
7. Mill.
8. Spencer
Chapter IV. — The Test of Truth: Analytic
1. The value of (a) Sense -perception ; (b) of the distinction between
Formal and Material ; (c) of Universality ; (d) of Innateness ;
of Clearness and Distinctness ; (/) of the Sufficient Reason. 64
2. Necessity and the Inconceivability of the Opposite. • . ' '^
3. Necessity as determined by Definiteness of Conception and Relation. 73
4. Necessity and Consistency ...... 75
5. Though the characterisation of the Criterion is imperfect, it is not
useless ........ 78.