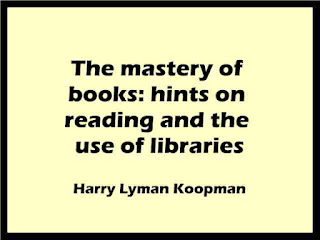 Excerpt:
The student undeveloped and untrained mind, his ignorance and the of his own strength and weakness, and his entire unconsciousness of the tremendous forces locked up in the quiet rows of volumes about him? Is it not certain that the books, with the terrible odds in their favour, will prove an overmatch for the raw student, and leave him for evermore an intellectual parasite or slave?
Books are not merely represented, they actually present, the living force of the master spirits of the world.
Yet the student's road to victory, is, after all, a plain one. He has but to remember that these serried ranks of learning have over and again found their conqueror; that this very conquest is his own high calling. Let him fearlessly confront their marshalled columns, calmly estimate their power and his own, and offer battle on his vantage-ground instead of theirs, and, without a blow, the whole frowning host will surrender at discretion. In the choice of weapons and vantage ground in this Battle of the Books, it is the attempt of the following pages to assist the student.
"Read these, follow those." It is rather the aim of the work to take counsel with the student in regard to his purposes in reading; to consider with him his capacities and opportunities; to aid him in turning to such classes of books as will further the attainment of his aims; and also, by the suggestion of various methods, to lead him to the study of his own qualities of mind and character, to the end that he may choose the material and manner of reading most profitable for himself.
often looks in vain to its educated men for guidance. False There can be but one answer: that they are educated, just really educated.
They have not the eye trained to see things as they are. Two generations ago the education of most American students was about equally fit or unfit for the nineteenth century or for the ninth, for an American or for a South Sea islander.
Since that time education has been brought increasingly into relation to life; but when we seek the cause of the educational absurdities that have been abolished, as well as of those that still remain, the answer is easy to give in the one word — superstition.
book details : Download The mastery of books - PDF ebook