Little men by Louisa May Alcott 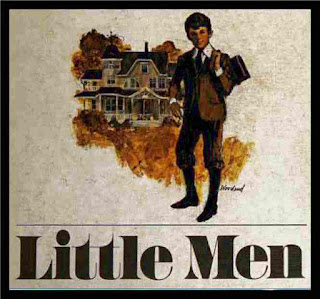 Louisa May Alcott was an American novelist, short story writer and poet better known as the author of the novel Little Women and its sequels Little Men and Jo's Boys. Little Men, or Life at Plumfield with Jo's Boys, first published in 1871.

The novel reprises characters from Little Women and is considered by some the second book in an unofficial Little Women trilogy, which is completed with Alcott's 1886 novel Jo's Boys, and How They Turned Out: A Sequel to "Little Men". It tells the story of Jo Bhaer and the children at Plumfield Estate School. It was inspired by the death of Alcott's brother-in-law, which reveals itself in one of the last chapters when a beloved character from Little Women passes away.
It has been adapted to a 1934 film, a 1940 film, a television series, and a Japanese animated television series.
Review by Emily

This book brought me so much joy. The boys in this book are characters I’ll keep in my heart forever. I also loved the sprinkle of the original characters in here too (apart from Jo of course).