Leaves from an Egyptian note-book 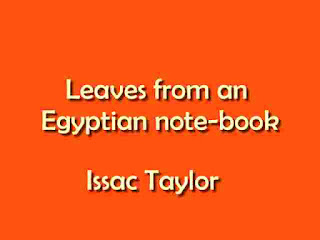 Narratives of Egyptian travel being already sufficiently abundant, I have not attempted to add another to the list. The scope of this volume is wholly different. It consists, for the most part, of notes of conversations with Egyptians on politics and religion.
I went to Egypt, the headquarters of Islam, in order to investigate the truth of certain asser- tions which have of late been freely made as to the barbarism, ignorance, profligacy, and intolerance of Mahommedan nations.
My inquiries were facilitated by the fact that some of my pleas for a better mutual understanding between Christians and Mahommedans had been recently reproduced, with appreciative comments, in the vernacular journals of Cairo, Beyrout, and Constantinople
Hence I found, somewhat to my surprise, that my name and my opinions were not unknown to Mahommedan gentlemen, who placed at my disposal means of information not accessible to ordinary tourists. I have held long and interesting discussions, not only with Europeans resident in Egypt, and with men who fill important posts in the Egyptian government, but with Moslems of every class, who have conversed, without reserve, on the tenets of Islam, and on the condition and prospects of their country and their religion.
I have also been allowed to visit many of the schools and colleges of Cairo, and have talked freely with the students and teachers, and have examined several of the classes. What has been told me may not always have been the truth, but at all events it has been that which my informants wished me to believe; and it is not unimportant to know what Moslems desire that Christians should think as to the tenets and practices of their religion. I have, as far as possible, check the information given to me by personal observation.
The conclusions at which I have arrived differ so widely from the views prevalent in England, that I believe I shall be doing a real service to the cause of truth and charity by placing them on record. And if I seem to have stated my opinions somewhat dog- matically, I have done so simply for the sake of brevity.
Neither have I considered it necessary perpetually to reaffirm my belief in the immeasur- able superiority of our own religion and civilization to those of Egypt, these being matters on which my readers have doubtless formed their own con- clusions. I find that comparatively few travellers seek or obtain opportunities of conversing confidentially with Mahommedans on the subject of their beliefs as to which they are usually reticent, in accordance with a precept of the Koran, which forbids them to argue with Christians in the spirit of hostile controversy.
But since, in India and elsewhere, we have at least fifty millions of Mahommedan fellow-subjects, it cannot be unimportant for us to know how far they agree or differ from us in their way of looking at fundamental questions of science, morals, politics, and religion. Considering also the peculiar relations in which we stand to Egypt,. it seems desirable that we should not be ignorant of what the Egyptians think of our occupation of their country, of our methods of administration, and of the reforms we have introduced.