The idea of God as affected by modern knowledge 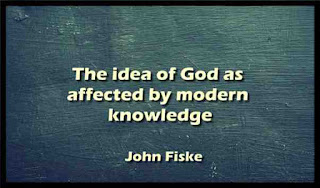 Its value is the impression that it intentionally makes that theism is necessary to any comprehensive view of evolution.
When asked to give a second address before the Concord School of Philosophy, I gladly accepted the invitation, as affording a proper occasion for saying certain things which I had for some time wished to say about theism. My address was designed to introduce the discussion of the question of whether pantheism is the legitimate outcome of modern science.
It seemed to me that the object might best be attained by passing in review the various modifications which the idea of God has undergone in the past, and pointing out the shape in which it is likely to survive the rapid growth of modern knowledge, and especially the establishment of that great doctrine of evolution which is fast obliging us to revise our opinions upon all subjects whatsoever. Having thus in the text outlined the idea of God most likely to be conceived by minds trained in the doctrine of evolution, I left it for further discussion to decide whether the term " pantheism" can properly be applied to such a conception.
While much enlightenment maybe got from carefully describing the substance of a philosophic doctrine, very little can be gained by merely affixing to it a label; and I could not but feel that my argument would be simply encumbered by the introduction of any question of nomenclature involving such a vague and uninstructive epithet as "pantheism." Such epithets are often regarded with favour and freely used, as seeming to obviate the necessity for that kind of labour to which most people are most averse, the labour of sustained and accurate thinking.
People are too apt to make such general terms do duty in place of a careful examination of facts, and are thus sometimes led to Preface. vti strange conclusions. When, for example, they have heard somebody called an "agnostic," they at once think they know all about him ; whereas they have very likely learned nothing that is of the slightest value in characterizing his opinions or his mental attitude. A term that can be applied at once to a Comte, a Mansel, and a Huxley is obviously of little use in the matter of definition. But, it may be asked, in spite of their worldwide differences, do not these three thinkers agree in holding that nothing can be known about the nature of God?
Perhaps so, one cannot answer even this plain question with an unqualified yes; but, granting that they fully agree in this assertion of ignorance, nevertheless, in their philosophic attitudes with regard to this ignorance, in the use they severally make of the assertion, in the way it determines their inferences about all manner of other things, the differences are so vast that nothing but mental confusion can come from a terminology which would  content itself by applying to all three the common epithet "agnostic."
The case is similar to such a word as " pantheism," which has been familiarly applied to so many utterly diverse systems of thought that it is very hard to tell just what it means. It has been equally applied to the doctrine of "the Hindu philosophers of the orthodox Brahmanical schools," who "hold that all finite existence is an illusion, and life mere vexation and mistake, a blunder or sorry jest of the Absolute;" and to the doctrine of the Stoics, who "went to the other extreme, and held that the universe was the product of perfect reason and in an absolute sense good." (Pollock s "Spinoza," p. 356.) In recent times it has been commonly used as a vituperative epithet, and hurled indiscriminately at such unpopular opinions as do not seem to call for so heavy a missile as the more cruel term "atheism."
The writer who sets forth in plain scientific language a physical theory of the universe is liable to be scowled at and called an atheist; but, when the very same ideas are presented in the form of oracular apophthegm or poetic rhapsody, the author is more gently described as " tinctured with pantheism."
book details :
Download The idea of God as affected by modern knowledge -