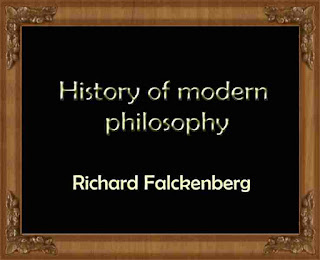 The aim of this translation is the same as that of the original work. Each is the outcome of an experience in university instruction in philosophy and is intended to furnish a manual which shall be at once scientific and popular, one to stand midway between the exhaustive expositions of the larger histories and the meagre sketches of the compendiums. A pupil of Kuno Fischer, Fortlage, J. E. Erdmann, Lotze, and Eucken among others.
Professor Falckenberg began his career as a Docent at the University of Jena. In the year following the first edition of this work he became Extraordinarius in the same university, and in 1888 Ordinarius at Erlangen, choosing the latter call in preference to an invitation to Dorpat as successor to Teichmiiller. The chair at Erlangen he still holds.
His work as teacher and author has been chiefly in the history of modern philosophy. Besides the present work and numerous minor articles, he has published the following: Ueber den intelligiblen Char- akter, zur Kritik der Kantischen FreiheitsleJire^1879 .Grund- ziige der Philosophie des Nicolmis Cusanus, 1880-81 ; and Ueber die gegenwdrtige Lage der deutschen Philosophie, 1890 (inaugural address at Erlangen), Since 1884-5
Professor Falckenberg has also been an editor of the Zeitschrift fiir PJiilosophie und philosophische Kritik, until 1888 in association with Krohn, and after the latter's death, alone. At present he has in hand a treatise on Lotze for a German series analogous to Blackwood's Philosophical Classics, which is to be issued under his direction. Professor Falckenberg's general philosophical position may be described as that of moderate idealism.
His historical method is strictly objective, the aim being a free reproduction of the systems discussed, as far as possible in their original terminology and historical connection, and without the intrusion of personal criticism. The translation has been made from the second German edition (1892), with still later additions and corrections communicated by the author in the manuscript.
The translator has followed the original faithfully but not slavishly. He has not felt free to modify Professor Falckenberg's expositions, even in the rare cases where his own opinions would have led him to dissent, but minor changes have been made wherever needed to fit the book for the use of English-speaking students.
.Thus a few alterations have been made in dates and titles, chiefly under the English systems and from the latest authorities; and a few notes added in the elucidation of portions of the text. Thus again the balance of the bibliography has been somewhat changed, including transfers from text to notes and vice versa and a few omissions, besides the introduction of a number of titles from our English philosophical literature chosen on the plan referred to in the preface to the first German edition. The glossary of terms foreign to the German reader has been replaced by a revision and expansion of the index, with the analyses of the glossary as a basis.
Wherever possible, and this has been true in all important cases, the changes have been indicated by the usual signs.
The translator has further rewritten Chapter XV., Section 3, on recent British and American Philosophy. In this, so much of the author's (historical) standpoint and treatment as proved compatible with the aim of a manual in English has been retained, but the section as a whole has been re-arranged and much enlarged.
The labour of translation has been lightened by the example of previous writers, especially of the translators of the standard treatises of Ueberweg and Erdmann. The thanks of the translator are also due to several friends who have kindly aided him by advice or assistance: in particular to his friend and former pupil, Mr C. M. Child, M.S., who participated in the preparation of a portion of the translation; and above all to Professor Falckenberg himself, who, by his wilHng sanction of the work and his co-operation throughout its progress, has given a striking example of scholarly courtesy.