Some philosophy of the Hermetics 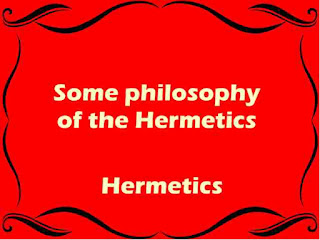 Nature has a way of concealing and revealing. She tells half her story out in the sunshine in a loud voice and the other half in whispers underground. She is coy like a coquette and stern like a judge. She excites curiosity in the student, and dread in the debauchee. She holds the man of science to her breast but is dumb to the lover of pleasure. She scorns the victim of priestcraft and repudiates the supernatural. The Sage takes his cue from his mother; like Nature, he conceals and reveals.
He who would see other than the smiling, scowling face of Hermes must search the dark places by the light of his own candle; Hermes locks the gate between the outer and inner Temple; and he, only, enters the latter, who has the password and the key. In reading this book please notice how the essays vary in style; some of them falling into a weird rhapsody, others laconic and plain
The Mystic will understand the reason for the difference, while another will peruse only the words. The barbaric splendour of Nature reveals truth and law as surely as does her terrible logic. She speaks in poetry and in prose. Facts are rarely ever naked, but often not only draped but masked. The occult eye sees straight to the heart of a fact, while the normal lens dwells on the habiliments. Enough has been said save this Man inevitably cometh unto his own.
Wlio were they? What are they? They were those who could speak or keep silent. They are those who whisper or shout.
They believe in silver and gold. " If speech is silver silence is gold." They believe in the conservation of energy, and its transformation. They believe in the Unit and in the many the special and the general. They have found the Philosopher's stone the elixir of life. They catch glimpses of Eldorado the promised land. They know the time and realize eternity.
They comprehend distance and space. They circumscribe the square with the circle and death with life. They teach an eternity of being and an endless variety of forms. They wed involution to evolution, and yesterday to tomorrow. They insist on an object as the mirror of the subject, and consciousness as the child of the two. They hold that Nirvana is poise a motionless motion the paradox of being.
To find the Hermetic out of Thibet is to discover him next door. He is as likely to be in broadcloth as in adept's robe and as possible in London as in Benares. He is rare. Gold is not picked up without stooping, nor the fountainhead discovered without searching. Swine are about and pearls are treasured. Enough, save this The false implies the true. Chaos, order. The word, secrecy. " The one thing, many.". With your heart filled with emotions, your head stormy with thought; with your back on the years behind you, facing the years ahead you, a man, stand trembling with the consciousness of self and wonder what next. Philosophy! ah me! Philosophy! When the heart beats to the tune of love, or your brain throbs with a master-passion Philosophy! you plunge headlong into life as the comet into space-living-living-living-only living. Philosophy!

book details : Download some philosophy of the hermetic - PDF ebook -