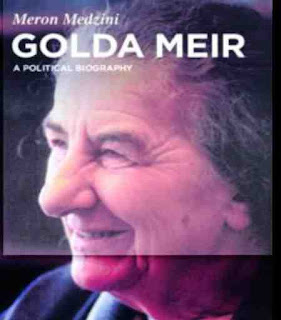 Excerpt:
This book originally appeared in Hebrew in 1990 under the name The Proud Jewess— Golda Meir and the Vision of Israel. Published twelve years after her death, it was based on sources that were available until the late 1980s. In those days many controversial and delicate items were still subject to censorship. Israel’s population at the time numbered some five million souls. It was clear that there was a lack of a broad historic perspective to evaluate properly the life and work of Golda Meir as a major figure that was the product of the Jewish community in Palestine during the Mandatory era and later the State of Israel.
The first Hebrew version was an attempt to portray the character of this amazing personality that at the time seemed to have been forgotten in Israel, although less abroad where she remained as a much better-known figure. Thirty years after her death and some twenty years after the appearance of the first version of this biography, my publisher thought the time had come to update the original biography with newly published and opened sources that were unavailable earlier. Many diplomatic and military documents that were hidden in archives in various countries were now opened. Israel’s population had grown to seven million, among them a million Russian Jews who immigrated to Israel from the former Soviet Union in the last decade of the twentieth century. Many of them showed much interest in this woman who lit the torch that led to the opening of the gates and to their immigration to Israel. Many of the younger generation that grew up in Israel since Golda died in 1978 wondered about her role in the recent history of the country, and specifically her responsibility for and her role during the Yom Kippur War, and asked whether what they heard of her was the full and final historic judgment. The second Hebrew version attempted to confront this major chapter in her life.
The younger generation that has grown up in Israel in the almost forty years after her death experienced leaders of another type, maybe some whose “ratings” were higher than hers, in their much better command of Hebrew, in their political and military experience.
But it is not hard to argue that apart from Menachem Begin, Yitzhak Rabin in his second term as prime minister and Ariel Sharon, none of her other successors surpassed her in leadership capability, in the understanding of the international and regional realities and mainly in her honesty and integrity, her adherence to her principles and values, her stubbornness and her patience in sticking to her truth. In certain ways, she reminds Israelis of another prime minister who in recent years is being more fully appreciated—Yitzhak Shamir (1915–2011). Perhaps Begin and Rabin had a greater vision than she, but this never detracted from her ability to lead Israel during five critical years in its history and to serve as the supreme commander during the Yom Kippur War.
Public domain
Download PDF ebook