Esperanto for the English 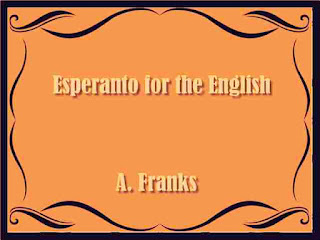 The study of Esperanto has become so general, owing to the remarkable success of the various International Congresses at Boulogne, Geneva, Cambridge, and Dresden, that another elementary Manual, designed to meet the peculiar requirements of the English-Speaking Peoples, may be excused. While there is nothing new to say, the old facts can, perhaps, be put in a form that may be helpful to beginners who know no other language but their own.
For instance, in the earlier exercises, only those Esperanto roots are employed which are either exactly the same as the English, or are so similar in appearance or sound as to be at once recognised and remembered.
Tlie student can thus concentrate his attention on the small grammatical variations between Esperanto and his mother tongue without being at the same time distracted by a strange vocabulary. Wherever possible, and wherever the connection is not obvious, an English word is given in brackets illustrating the Esperanto root as it may appear in another world than the one under consideration. For instance, dom-o, a house, may, at first view, appear quite strange, until it is pointed out that we have the same root in DOM-ICILK; similarly with Libro, a hook, and library, etc. In this research considerable assistance has been derived from the Etymological Dictionary of the Esperanto Language, by Louis Bastien. The author would also like to express his indebtedness to A Grammar and Commentary on the International Language Esperanto,
The author of Esperanto was born in Bialystock, Russia (a town notorious a few years ago for a terrible massacre), where he spent his boyhood. The inhabitants are of four nationalities — Russians, Poles, Germans, and Jews — each of which speaks a different language and is on bad terms with the others. It was impressed upon the youthful Zamenhof that the cause of their enmity and dissension was the fact that they could not understand one another, and that all that was necessary to ensure their living: in mutual love and harmony was a common neutral language. This idea, extended to the whole human family, has dominated Dr Zamenhof's life; and however fanciful it may appear to some of us, it must be admitted to be a noble ideal, well worth living and dying for. It places him on a pinnacle far above the sordid ambitions of ordinary life and accounts for the personal affection and reverence felt for him by every one of his adherents.
book details : Download Esperanto for the English- PDF ebook