English secularism - a confession of belief 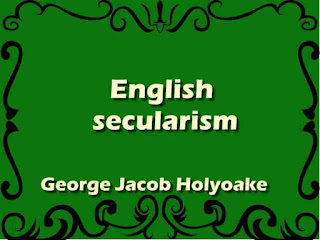 Excerpt from the book preface:
The open court, in which the series of articles constituting this work originally appeared, has given an account of many forms of faith, supplementary or confirmatory of its own, and sometimes of forms of opinions dissimilar where there appeared to be instruction in them. It will be an advantage to the reader should its editor state objections, or make comments, as he may deem necessary and useful. English Secularism is as little known in America as American and Canadian Secularisation is understood in Great Britain.
The new form of free thought known as English Secularism does not include either Theism or Atheism. Whether Monism, which I can conceive as a nobler and scientific form of Theism, might be a logical addition to the theory of Secularism, as outlined in the following pages, the editor of The Open Court may be able to show.
If this is so, every open-minded reader will better see the truth by comparison. Contrast is the incandescent light of argument. George Jacob Holyoake. Eastern Lodge, Brighton, England, February 1896. the representative freethinkers of the world Mr. _ George J. Holyoake takes a most prominent position.
He is a leader of leaders, he is the brain of the Secularist party in England, he is a hero and a martyr of their cause. Judged as a man, Mr Holyoake is of sterling character; he was not afraid of prison, nor of unpopularity and ostracism, nor of persecution of any kind. If he ever feared anything, it was be- ing not true to himself and committing himself to something that was not right.
He was an agitator all his life, and as an agitator, he was — whether or not we agree with his views — an ideal man. He is the originator of the Secularist movement that was started in England; he invented the name Secularism, and he was the backbone of the Secularist propaganda ever since it began. Mr Holyoake left his mark in the history of thought, and the influence which he exercised will for good or evil remain an indelible heirloom of the future. Secularism is not the cause which The Open Court Publishing Co. upholds, but it is a movement which on account of its importance ought not to be overlooked. Whatever our religious views may be, we must reckon with the conditions that exist, and Secu- larism is powerful enough to deserve general attention.
What is Secularism?
Secularism espouses the cause of the world versus theology: of the secular and temporal versus the sacred and ecclesiastical. Secularism claims that religion ought never to be anything but a private affair; it denies the right of any kind of church to be associated with the public life of a nation and proposes to supersede the official influence which religious institutions still exercise in both hemispheres. Rather than abolish religion or paralyse its influence,
The Open Court Publishing Co. would advocate on the one hand to let the religious spirit pervade the whole body politic, together with all public institutions, and also the private life of every single individual; and on the other hand to carry all secular interests into the church, which would make the church subservient to the real needs of mankind.
Thus we publish Mr Holyoake's Confession of Faith, which is an exposition of Secularism, not because we are Secularists, which we are not, but because we believe that Mr Holyoake is entitled to a hearing. Mr Holyoake is a man of unusually great common sense, of keen reasoning faculty, and of indubitable sincerity. What he says he means, and what he believes he lives up to, what he recognises to be right he will do, even though the whole world would stand up against him. In a word, he is a man who according to our conception of religion proves by his love of truth that, however, he may disclaim it, he is actually a deeply religious man.
His religious earnestness is rare, and our churches would be a good deal better off if all the pulpits were filled with men of his stamp. We publish Mr Holyoake's Confession of Faith not for Secularists only, but also and especially for the benefit of religious people, of his adversaries, of his antagonists; for they ought to know him and understand him; they ought to appreciate his motives for dissenting from church views, and ought to learn why so many earnest and honest people are leaving the church and will have nothing to do with church institutions.
Why is it that Christianity is losing its hold on mankind? Is it because the Christian doctrines have become antiquated, and does the church no longer adapt herself to the requirements of the present age? Is it that the representative Christian thinkers are lacking in intellectuality and moral strength? Or is it that the world at large has outgrown religion and refuses to be guided by the spiritual counsel of popes and pastors? Whatever the reason may be, the fact itself cannot be doubted, and the question is only, What will become of religion in the future? Will the future of mankind be irreligious (as for in- stance Mr Lecky and M. Guyau prophesy); or will religion regain its former importance and become again the leading power in life, dominating both public and private affairs?
the book details : Download English secularism- PDF ebook - 4.3 MB